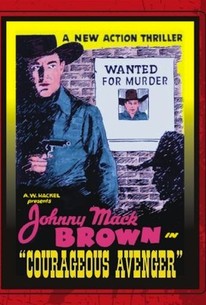 Cowboy star Johnny Mack Brown made eight westerns for A.W. Hackel's Supreme Pictures during the 1935-36. Courageous Avenger, like most of the Brown Supremes, was directed by Robert N. Bradbury, then concurrently working on Hackel's Bob Steele series (Bradbury was, of course, Steele's father). In this one, Brown borrows Steele's favorite plotline: searching for his father's murderer. He dukes it out with rustler Warner Richmond, then enjoys a fadeout clinch with Helen Erikson. It all transpires in an economical (in every sense of the word) 58 minutes.

Bob Burns
as Sheriff
View All

There are no critic reviews yet for Courageous Avenger. Keep checking Rotten Tomatoes for updates!

There are no featured reviews for Courageous Avenger at this time.