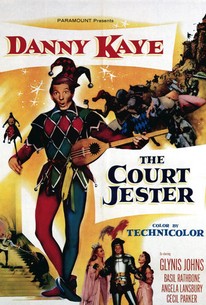 Danny Kaye spoofs medieval swashbucklers in this classic musical comedy. While the infant King of England awaits his rightful place as leader of the British Empire, his rule is usurped by Roderick (Cecil Parker), an evil pretender to the throne. Brave rebel leader The Black Fox (Edward Ashley) intends to remove Roderick from the palace and bring the crown back to its true owner, but in the meantime the baby king needs to be looked after, which is the job of a man named Hawkins (Kaye). The Black Fox travels with the little king and his rebels as they search for the key to a secret tunnel that will allow them passage into the castle. Maid Jean (Glynis Johns), one of the rebels, meets a man en route to the Castle who is to be Roderick's new jester. The rebels quickly hatch a plan: detain the jester and send Hawkins in his place; the king can then find the key and initiate the overthrow. Hawkins is able to persuade Roderick and his men that he is indeed a jester, but his espionage work gets complicated when Princess Gwendolyn (Angela Lansbury) falls in love with him, and he runs afoul of Sir Ravenhurst (Basil Rathbone), the evil genius behind Roderick. Court Jester features Kaye's famous "Pellet with the Poison" routine. ~ Mark Deming, Rovi

Herbert Rudley
as Captain of the Guard

Nels Nelson
as One of Hermine's Midgets

Edward Peter Gibbons
as One of Hermine's Midgets

Thomas J. Cotton
as One of Hermine's Midgets

Billy Curtis
as One of Hermine's Midgets

A.J. Buster Resmondo
as One of Hermine's Midgets

Irving Fulton
as One of Hermine's Midgets

Frank Delfino
as One of Hermine's Midgets

'Little Billy' Rhodes
as One of Hermine's Midgets

Henry Lewis Stone
as One of Hermine's Midgets

George Louis Spotts
as One of Hermine's Midgets

Irving Douglas
as One of Hermine's Midgets

Harry Monty
as One of Hermine's Midgets

James B. Jordan
as One of Hermine's Midgets

Floyd Dixon
as One of Hermine's Midgets

John O'Malley
as Courier/Announcer
View All

News & Interviews for The Court Jester

View All The Court Jester News

Critic Reviews for The Court Jester

Rightly regarded as one of the peaks of Kaye's career.

Costumed swashbucklers undergo a happy spoofing in The Court Jester with Danny Kaye heading the fun-poking.

In The Court Jester, Funnyman Kaye takes all the laughs he needs, but he takes them when they do not stop the show.

Some accomplished slapstick, but nothing special.

It's a Danny Kaye vehicle from the first frame...meant to be nothing more than a good bit of fun... More significantly, it's a reminder of how easily we can forget some of Hollywood's most extraordinary, if nonconforming, geniuses.

Nothing can top the fantastic wordplay involving the vessel with the pestle, the chalice from the palace, and the flagon with a dragon ... only one of which holds the brew that is true.

Danny Kaye and his reliable writerdirectors, Norman Panama and Melvin Frank, join forces in another high-spirited comedy, this one a burlesque of the screen's own sword-opera spectaculars.

The Court Jester (1955) is Paramount's Vista-Vision comedy film starring Danny Kaye (in his best-known performance). It is a classic, high-energy musical spoof of the dashing adventure films in Hollywood's Golden Age...

I was of course struck by the light touch with which the romance is handled.

It's as much horseplay as swordplay and, altogether, a witty delight.

Audience Reviews for The Court Jester

Danny Kaye's mistaken identity comedy set on the medieval British court is nothing less than one of the funniest films of all times. Sure, it starts out slowly and with a couple of old-fashioned yet catchy musical pieces. But once things are moving and the innocent bard starts playing the court jester's role, it's a joy to watch the mix-ups, puns and jokes that come with it. That's so cleverly written and charming that you can't help but smile for 90 minutes. It also helps that Danny Kaye is simply incredibly funny, with the sped-up knighting process and poisoned goblet sequence being the outrageous highlights. The old castle and ramparts sets from the classic knight adventures of that era are oozing with nostalgia. During the hilarious showdown things get particularly wacky and hilarious. You just have to love a film where dwarfs juggle grown men on their feet and the hero's fencing skills depend on a snap of the fingers. And you know you've just watched a feel good film when even the evil king sings along to the happy ending tune. A timeless masterpiece of comedy.

[Rewatch] I film I loved as a child and this is my first viewing since and was full of Nostalgia for me. No doubt about it that Danny Kaye was a great showman and he was very entertaining throughout. Clever witty songs, along with some great comical scenes such as the Vessel with the Pestle. A feel good film.

Good old fashion fun. They jump the shark a little when the midget circus comes to the rescue, but the final sword fight is makes up for it. and Angela Lansbury used to be HOT!