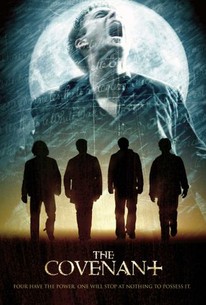 In 1692, in the Ipswich Colony of Massachusetts, five families with untold power formed a covenant of silence. One family, lusting for more, was banished; its bloodline disappearing without a trace--until now. This thriller tells the story of the Sons of Ipswich, four young students at the elite Spencer Academy who are bound by their sacred ancestry. As descendants of the original families who settled in Ipswich Colony in the 1600s, the boys have all been born with special powers. When the body of a dead student is discovered after a party, secrets begin to unravel which threaten to break the covenant of silence that has protected their families for hundreds of years.

Larry Day
as Off. Reeve

Jean-Loup Yale
as Nicky the Bartender

Critic Reviews for The Covenant

... this falls well short of the Buffy-level resonances at which [Harlin] was presumably aiming.

Director Renny Harlin helms like a bat out of hell, and obviously doesn't know a pentagram from a mammogram.

Utterly stupid and full of lazy plotting and lazier dialogue, this is just idiotic enough to entertain on nights when you want to give your brain a rest.

There are worse things for a horror-thriller about supernatural high-schoolers to not be. Like not scary. Or not thrilling. Or not as entertaining as an episode of Charmed.

Only the modestly entertaining performances of Strait and Ramsey save this film from complete failure.

[An] unbewitching brew of clichés.

This forgettable supernatural-teen thriller is the kind of WB-style soap opera where the characters have names like Chase Collins and Reid Garwin.

Audience Reviews for The Covenant

More aimed at younger teens as it's trying to get in on the Twilight supernatural scene.

All of these stars are purely because of the attractive men and the actually alright story with some great thrills and action scenes.

There was nothing special about it. Can be boring (most of the time) but got some cool action flicks. The ending was way too corny. Such a lame fight I tell you. Watch this if you're Steven's fan

. But I'm not his fan so it was kinda waste of time for me.

Stylish but the story needs lots of work and the actors need some acting classes. All they do is look pretty. :P