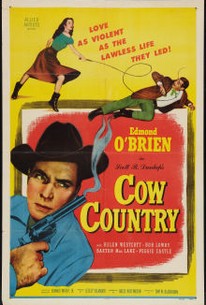 A "big" western by Allied Artists standards, Cow Country is directed with his usual panache by horse-opera expert Lesley Selander. Adapted from a novel by Curtis Bishop, the film stars Edmond O'Brien as Ben Anthony, an adventurer-for-hire who casts his lot with Texas cattleman Walt Garnet (Robert H. Barrat). The villains want to drive Anthony and his fellow ranchers off their land, but Ben's six-guns prevent this, at least temporarily. Meanwhile, Linda Garnet (Helen Westcott), Walt's daughter and the fiancee of the film's chief bad guy Harry Odell (Bob Lowery), aligns herself with Ben when Odell proves to be spectacularly unfaithful with saloon chirp Melba Sykes (Peggie Castle). Barton MacLane rounds out the cast in one of his standard loud, abrasive roles. ~ Hal Erickson, Rovi

There are no critic reviews yet for Cow Country. Keep checking Rotten Tomatoes for updates!

There are no featured audience reviews yet. Click the link below to see what others say about Cow Country!