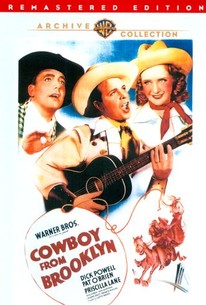 Dick Powell stars as a Brooklynite who becomes a cowboy in spite of himself. Drifting into a small western town, Powell takes the only job available as a ranch hand. He likes to sing in his spare time, which attracts the attention of talent scout Pat O'Brien. Before you can say Gene Autry, Powell is promoted into America's favorite singing cowboy--though he's hard pressed to prove his western skills when the plot situations demand it. Rather condescending in its attitude towards western stars (as non-western movies tended to be in the 1930s, 1940s and 1950s), Cowboy From Brooklyn was another step backward in the (temporarily) fading career of Dick Powell. The only good thing to come out of the film was the song "Ride, Tenderfoot, Ride", which became the leitmotif of many a Warner Bros. cartoon short.

May Boley
as Mrs. Krinkenheim

William B. Davidson
as Mr. Alvey

Critic Reviews for Cowboy from Brooklyn

There are no critic reviews yet for Cowboy from Brooklyn. Keep checking Rotten Tomatoes for updates!

There are no featured reviews for Cowboy from Brooklyn at this time.