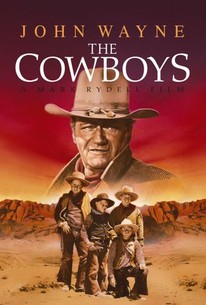 In one of John Wayne's more interesting late Westerns, "The Duke" plays Will Anderson, a crusty veteran cattleman preparing a 400-mile drive to get a herd of steers to market. Shortly before the trip is scheduled to begin, Will's crew quits when they get word of a nearby gold strike. With little time and few alternatives, Will recruits eleven boys, ages nine through 13, and teaches them the basics of herding cattle and riding the range. Bruce Dern plays a memorably foul villain and cattle rustler named Long Hair, while Roscoe Lee Browne portrays Jebediah, the cattle drive cook, and Colleen Dewhurst is Kate, a madam. ~ Mark Deming, Rovi

A Martinez
as Cimarron

Tony Epper
as Rustler
View All

Critic Reviews for The Cowboys

The scenes along the way of the kids learning to be cowboys are good, warm fun, and it's a shame they had to go for the unlikely, violent, and totally contrived last thirty minutes.

Dern certainly has no difficulty donning the guise of a villain.

A summer of brutally hard work, hunger, camping in the elements, and rattlesnake danger will certainly turn boys into men. In this case, however, it appears to supernaturally turn boys into a seasoned platoon of modern-day special operations warriors.

A coming-of-age film of the toughest sort. Far from Wayne's best, but nevertheless a movie whose ending ignites a heated discussion.

Even with a closing that breaks with tradition, The Cowboys is not as eventful as one would have hoped for in a John Wayne movie.

At the center of this picture, just as in Red River, is the passing of the Western mores and masculinity code from John Wayne to the younger generation. Rydell's Western is formulaic and familiar, but the Duke is in top form.

An engaging late John Wayne Western, though the macho philosophy of the need to kill might turn off the more liberal viewer.

Audience Reviews for The Cowboys

This is the best John Wayne's latter-day Westerns. He's more like grandfatherhood at his age to a group of young school boys as his drivers in order to get his cattle to market, but the kids learn well. Bruce Dern is on hand as the outlaw leader who fights our hero in one of the genre's most memorable (and violent) scenes since Red River. Along as a second role model is Roscoe Lee Browne. Possessor of one of the greatest speaking voices in the English speaking world, Browne is the first black man they've ever met. In fact one of the kids uses the "N" word when first meeting him, out of ignorance more than racism. Browne sets them straight by example more than preaching. The oldest two kids, A Martinez and Robert Carradine, have gone on to some considerable adult careers which they are still enjoying. All the kids are a winning bunch however.

A John Wayne film that was brave enough to kill him before the film was over. The film seems like it could be a lighthearted affair. An old cowboy hires a bunch of near-do-well boys to help on a cattle drive. While the film produces some comedic moments, it never hides the harsh realities of the west. One of the boys is killed at the beggining while caught in a stampead. And the boys watch as John Wayne is gunned down trying to protect them from some cattle rustlers. The boys seek revenge and do some killing of their own. Much darker and better than I expected it to be.