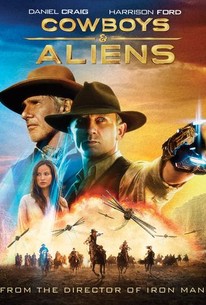 Critics Consensus: Daniel Craig and Harrison Ford are as dependably appealing as ever, but they're let down by director Jon Favreau's inability to smooth Cowboys & Aliens' jarring tonal shifts.

Critics Consensus: Daniel Craig and Harrison Ford are as dependably appealing as ever, but they're let down by director Jon Favreau's inability to smooth Cowboys & Aliens' jarring tonal shifts.

Critic Consensus: Daniel Craig and Harrison Ford are as dependably appealing as ever, but they're let down by director Jon Favreau's inability to smooth Cowboys & Aliens' jarring tonal shifts.

1875. New Mexico Territory. A stranger (Craig) with no memory of his past stumbles into the hard desert town of Absolution. What he discovers is that the people of Absolution don't welcome strangers, and nobody makes a move on its streets unless ordered to do so by the iron-fisted Colonel Dolarhyde (Ford). It's a town that lives in fear. But Absolution is about to experience fear it can scarcely comprehend as the desolate city is attacked by marauders from the sky. Now, the stranger they rejected is their only hope for salvation. As this gunslinger slowly starts to remember who he is and where he's been, he realizes he holds a secret that could give the town a fighting chance against the alien force. -- (C) Official Site

Rex Rideout
as Fiddler
View All

From the cool special effects, to its top-notch acting and wickedly fun concept, Cowboys and Aliens is just that film that you may in fact hate to love. But it is really enjoyable.

It must be said upfront that, for all its problems and script deficiencies, Cowboys & Aliens is probably the most continually entertaining effort of director Jon Favreau's still relatively young career.

There is nothing that fascinating about Favreau's treatment, nor his source material, but compared with similar blockbuster fare of recent months, this curious exercise in genre bending is very watchable.

If you can swallow the shameless set-up, it's all highly entertaining.

Jon Favreau handles the big setpieces with competence if no great flair; whenever the plot backs itself into a corner something else will make a sudden, inexplicable interruption.

Favreau ... allows the material's imaginative possibilities to flare up and fade away.

The idea of Cowboys & Aliens is so wild that it's a shame the film doesn't make more of it.

For a film that should have been out of this world, Cowboys & Aliens is disappointingly down to earth.

Commits the one cardinal sin that a movie with such a ridiculous concept absolutely cannot commit; it's boring.

The many dysfunctional features of the script translate into scenes that slow down the pace of the footage until it is disrupted, not infrequently, into an authentic trance. [Full Review in Spanish]

Cowboys and Aliens purports to be a genre mash-up, which means that somebody needed to figure out how to integrate Western tropes with sci-fi ones. Unfortunately, no one bothered.

it takes more than a clever concept to drive a film, and Cowboys & Aliens never rises above that to attain its full potential.

Now this film is one of the most entertaining films Jon Favreau has directed, And I love the first Iron Man film. Daniel Craig, Harrison Ford, and Olivia Wild all do good jobs as the main characters, and the side characters are all well done too, Clancy Brown as the pastor, and Sam Rockwell as the Doctor all do fantastic jobs. The aliens in this movie have similar desires like the aliens in the terrible film "Battlefield Earth" They want gold, why I couldn't figure it out and am not sure if they mention it. The aliens look interesting, and I will say one thing right now that is a bit of a subplot with one of the aliens and Daniel Craigs character.The film starts out pretty slow but once the aliens show up, it speeds on by like nothing and is a definite thrill ride. The ending 35 minute action scene is incredible to watch and is very well done. All I have to say is, if you're squeamish or very jumpy in horror movies, don't see this, but if you aren't and want a fun action western film, check this out. My final rating 3.5*s out of 5

An embarrassment for all involved. I'm rooting for the Indians, in this case.

Every now and again along comes a great idea for a movie ... that simply fails when it comes to execution. The Western that the film begins as is actually okay (if generic), but when the sci-fi portion kicks in, uhh, nothing. Its like they forgot to have fun with the concept. The actors are okay (Craig doing an okay Yank accent, Ford given little to do but grouse), the whole work servicible, but its akin to being served a meal w/o the main course. You leave wanting more.

Daniel Craig was great. Ford had his moments. But this movie could have been so so so much better!