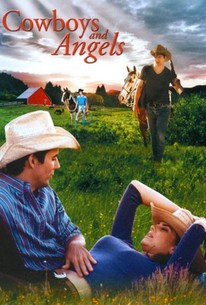 Writer-director Gregory C. Haynes serves up a down-home twist on the traditional romantic comedy with this tale of a 30-something lawyer who starts to feel the marriage bug. Danny (Adam Trese) still harbors dreams of becoming a cowboy when his fiancée leaves him on the eve of their wedding ceremony. Luckily, not one, but two women come along to ease his suffering: the bubbly Jo Jo (High Art's Radha Mitchell) and the more traditional Candice (Mia Kirshner). Which woman will put an end to the tears in Danny's beer? Will he really trade in his briefs and torts for chaps and a lariat? Cowboys and Angels premiered at the 2000 L.A. Independent Film Festival.

Critic Reviews for Cowboys and Angels

There are no critic reviews yet for Cowboys and Angels. Keep checking Rotten Tomatoes for updates!

There are no featured reviews for Cowboys and Angels at this time.