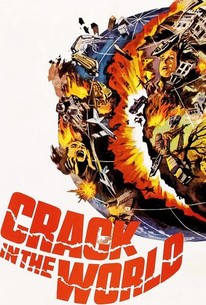 Crack in the World Photos

In this sci-fi drama, a well-meaning old scientist makes a terrible mistake while searching for a way to get at the magma lying near the center of the earth. They begin drilling into the crust, but something goes wrong and an enormous crack appears, threatening to destroy the planet.

Critic Reviews for Crack in the World

The best science-fiction thriller this year.

Crack in the World [is] distinguished principally by some startling special effects.

The theme often seems awesomely credible and the special effects are excellent, although the usual character conflicts in the scientific team become trying at times.

An engaging B film doomsday scenario sci-fi drama, one with a great menacing premise.

Scientists attempt to harness the inner energy of the Earth and get it all wrong in this moderate sci-fi thriller.

Although my tolerance for books of science fiction is so low as to be imperceptible, I remain spellbound for even the most spurious science-fiction movie.

Audience Reviews for Crack in the World

Crack in the World Quotes