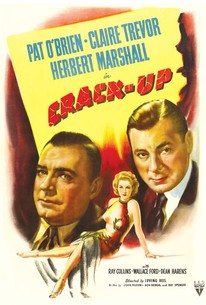 George Steele (Pat O'Brien), an expert on art forgeries, is fired from his job at a famous art museum because of his erratic behavior. George insists that he was involved in a train accident, but he is suffering from a black-out and cannot remember any of the events. Anxious to clear his name, George, aided by both his girlfriend Terry (Claire Trevor) and a newspaper reporter and undercover Scotland Yard agent Traybin (Herbert Marshall), who is investigating a ring of art forgers. Under the influence of sodium pentothal, George discovers that he was framed to avoid his discovery of several forgeries. George must now escape the gang and save his own life when they learn of this knowledge. Crack-Up is often neglected but remains an interesting, if somewhat implausible thriller, featuring a strong performance by Pat O'Brien, and with an interesting, post-war undertone of paranoia as George struggles to save himself and the art from the evil, selfish collectors, who would keep it for themselves.

Robert Bray
as Man with Drunk

Belle Green
as Woman in Audience

Alf Haugan
as Man in Audience

John Ardell
as Man
View All

The art lesson didn't register, but as a thriller Crack-Up wasn't a disaster.

There are no featured audience reviews yet. Click the link below to see what others say about Crack-Up!