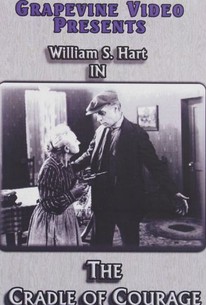 Cowboy star William S. Hart takes one of his rare vacations from Westerns in this picture to play a crook-turned-cop (at least he's still playing the good-bad man). After being forced to serve in World War I France, cracksman "Square" Kelly (Hart) comes home to San Francisco and decides to go straight. This earns him the enmity of his former gang, and even his mother (Getrude Claire), who thinks he has gone yellow. When Kelly discovers that his brother Jim, a fellow gang member (Francis Thorwald) was shot in the back by its leader, Tierney (Thomas Santschi), he goes out for revenge with his fists flying -- but this time he has the law on his side.

Critic Reviews for Cradle of Courage

A word must be said for the acting of Gertrude Claire, who plays Mother Kelly. She is convincing throughout.

There are no featured reviews for Cradle of Courage at this time.