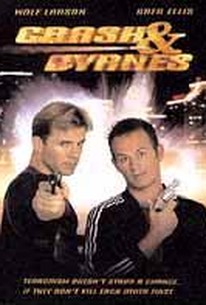 Two lawmen with wildly different philosophies must set aside their differences to save the world in this action thriller. Roman Byrnes (Greg Ellis) and Jack "Crash" Riley (Wolf Larson) are a pair of intelligence agents who have little in common beyond the fact that they're on the same side of the law; Byrnes is an all-business DEA man, while Crash is a retired CIA operative with a take-no-prisoners approach. But when an internationally known terrorist (Joanna Pacula) gets her hands on a biological weapon with unheard-of destructive power, CIA surveillance expert Rebecca Jordan (Sandra Lilly Lindquist) pulls Crash out of retirement and teams him up with Byrnes to stop the terrorist before it's too late. ~ Mark Deming, Rovi

Critic Reviews for Crash and Byrnes

There are no critic reviews yet for Crash and Byrnes. Keep checking Rotten Tomatoes for updates!

There are no featured reviews for Crash and Byrnes at this time.