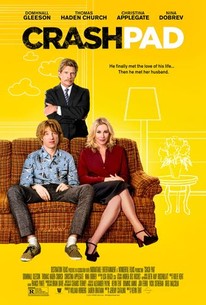 A hopeless romantic, who thinks he's found true love with an older woman, learns that she's married and that the fling is merely an instrument of revenge against her neglectful husband. He threatens to blackmail her by telling her husband, but his plan backfires when the husband decides the best way to get back at his wife is to move in and adopt the romantic's slacker lifestyle.

Anja Savcic
as Peggy
View All

Suburbicon Is a Stale Satire

You'd be forgiven for guessing that Crash Pad is yet another lazy, cable-unworthy comedy full of sorry slapstick and barn-broad humor. And you'll be surprised to discover that it's actually smartly written and expertly pulled off.

While Mr. Tent's direction is serviceable, it's safe. His movie lacks any stylish risks that would make this trio's bad romance memorable, leaving "Crash Pad" to feel like a warm-up act.

A plucky ensemble fails to elevate "Crash Pad," a forced, formulaic revenge comedy about an obnoxious slacker whose new housemate turns out to be the husband of his older ex-mistress.

A broadly appealing bad-behavior comedy relying on the winning chemistry of its two leads.

The film normalizes what they do and hopes we laugh at it because they're "just being boys." Rather than tear down masculinity stereotypes, Crash Pad reinforces them.

The movie works best as a goofy, snarky, and uncomfortable study of man-child frustrations and silly dreams, doing a generally good job at its most panicked.

Do we really want to understand either of these guys?

Shallow it is, as befits the genres concerned, and overall it lacks the charm to overcome this.

Crash Pad is a perfectly fine way to pass ninety minutes, but you'll soon forget you ever saw it.

Disappointing. I was interested to see something recent with Christina Applegate, and she's good here, but Stensland was such an off putting dweeb of a character, I just couldn't warm to this story. And my dvd was faulty and jamming up all through the movie. That didn't help either! But mostly just a cringeably bad movie with unbelievable characters.

The type of romantic comedy one might've seen in the 1960's, Domhnall Gleeson, Christina Applegate and Thomas Haden Church all do well as a mismatched trio making some sense of their derailed lives. It's got witty dialogue and an even hand at the director's chair and finally surprises. The last act is strained but this is a work that'll gain its legs with time, and repeated viewings. Well done for all concerned.