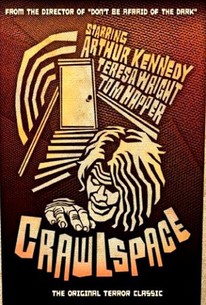 Crawlspace is a quirky made-for-TV movie about a strange young drifter (Tom Harper) who arrives in a small New England town. He is sheltered by a generous middle-aged couple (Arthur Kennedy and Teresa Wright), but he insists upon living in a tiny crawlspace in the couple's cellar. His hosts had hoped that the boy would fill an emotional gap in their childless lives, but the young visitor refuses to leave his cramped living area, where he harbors disturbing notions of taking revenge on a world he feels has wronged him. Crawlspace was adapted from the suspense novel by Herbert Lieberman. It should not be confused with a 1986 slasher flick also titled Crawlspace, wherein Klaus Kinski hides in the homes of the beautiful girls he intends to murder.

Fleet Emerson
as Wheeler
View All

There are no critic reviews yet for Crawlspace. Keep checking Rotten Tomatoes for updates!

There are no featured audience reviews yet. Click the link below to see what others say about Crawlspace!