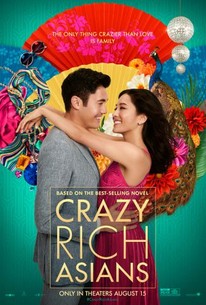 Critics Consensus: With a terrific cast and a surfeit of visual razzle dazzle, Crazy Rich Asians takes a satisfying step forward for screen representation while deftly drawing inspiration from the classic -- and still effective -- rom-com formula.

Critics Consensus: With a terrific cast and a surfeit of visual razzle dazzle, Crazy Rich Asians takes a satisfying step forward for screen representation while deftly drawing inspiration from the classic -- and still effective -- rom-com formula.

Critic Consensus: With a terrific cast and a surfeit of visual razzle dazzle, Crazy Rich Asians takes a satisfying step forward for screen representation while deftly drawing inspiration from the classic -- and still effective -- rom-com formula.

"Crazy Rich Asians" follows native New Yorker Rachel Chu (Wu) as she accompanies her longtime boyfriend, Nick Young (Golding), to his best friend's wedding in Singapore. Excited about visiting Asia for the first time but nervous about meeting Nick's family, Rachel is unprepared to learn that Nick has neglected to mention a few key details about his life. It turns out that he is not only the scion of one of the country's wealthiest families but also one of its most sought-after bachelors. Being on Nick's arm puts a target on Rachel's back, with jealous socialites and, worse, Nick's own disapproving mother (Yeoh) taking aim. And it soon becomes clear that while money can't buy love, it can definitely complicate things.

Russell Wong
as Himself

Jasmin Chen
as Herself

Susan Wong
as Woman in Coach

Kina Grannis
as Herself

50 F–k Yeah Moments of Female Empowerment in the Movies
Best-Reviewed Movies by Genre 2018
The Year in Review: The Biggest Stories from the Movies, TV, and Streaming in 2018

Crazy Rich Asians represents people and places with so little thought that it upholds a painful, brutal hegemony that's painfully apparent to people who live in Southeast Asia, where the film is actually set.

A binge-able series might have been a better way to go, since the script squeezes a sprawling supporting cast into boisterous caricatures and transforms an intricate flow chart of status among Singapore's superrich into a flood of affectations.

Aside from these important issues of representation and diversity, Crazy Rich Asians marks a welcome return for the funny, giddy, likeable, glamorous Hollywood romcom.

Somewhere between My Big Fat Greek Wedding and a Jane Austen novel: meticulous and hilariously alert to social structures, family dynamics and money, with a plucky underdog heroine.

Michelle Yoh is terrific not least because... you have [her] character who is very not funny in a way which is kind of impressive in a comedy.

The opulence of Crazy Rich Asians makes it different from other movies, but it's the solid and straightforward storytelling that makes it great.

It ties itself to its theme very well: the idea that relationships are affected by differences in social class...how the stereotypical Western mindset of individuality clashes with the more Eastern mindset of the community.

A good rom-com should sustain that sensation of blissful ignorance from credits to credits, and Crazy Rich Asians is a great rom-com, full of bubbles and bliss.

Fun and memorable characters portrayed by a talented cast, and is full of beautiful sets, costumes, and locations.

An escapist fantasy that entertains with its labyrinthine soap opera twists and turns, lush settings and all Asian cast but also digs a little deeper into the similarities and differences between the characters and cultures.

Here is a typical rom-com of the 1930s type (you know, the Great Depression, when everybody dreamed that being rich was the answer to life's difficulties, and the movies reflected that) in that a poor ingenue outsider faces considerable obstacles of the familial variety when she dares to aspire to marry the rich favorite son. So overdone, so familiar, as to be of the go-to-sleep-with- the-teevee-still-on variety. But that's merely the opening premise. Beyond is an intricately designed cultural assault, no less, in a cinematic bid for Asian inclusion and equality that implements your familiarity with those motifs to make its point. There's simply too much to list and so I'll only note that the romantic lead attempts a Cary Grant impersonation - shamelessly. Heading this assault is the indomitable Michelle Yeoh (who I love, and so enough about that!) as the hard-nosed matriarch. But, back to the film: pretty good.

This is a good movie that really shoots right down the middle for mass appeal. It does touch on some intricate details about growing up and living with an Asian family but really plays out as fancy blockbuster rom-com. Since this film does naturally come from a different angle than most rom-coms, however, with different issues and obstacles, it at least stands out. The B-story involving Astrid seems rushed and incomplete but leaves open the option for a sequel that will explore her more, which I would like to see.

Better than expected. I was glad they left a few things out from the book honestly, though I would have liked a little more Kitty Pong!

Crazy Rich Asians is a frothy mix of familiar 90s romantic comedy cliches and tropes but now with an all-Asian cast and Asian culture given a dignified spotlight. Thanks to the strides in representation, it makes the familiar feel fresh again. This is a very Pretty Woman princess fantasy story of an ordinary woman, Rachel Chu (the great Constance Wu) falling in love with a rich man who then whisks her away to his rich family home out of country and introduces her to the world of the cloistered elites, ex-girlfriends, and hangers-on and their disapproval. Much of the conflict hinges on her feeling accepted by her man's scowling, scary mother played by the formidable Michelle Yeoh (Crouching Tiger, Hidden Dragon). The two-hour running time mostly consists of a lot of blandly nice people. I think enough of these supporting characters could have been consolidated or eliminated to give more space to characters that matter. The film reminded me, in some regards, of the 50 Shades series where we jump from scene to scene to celebrate the extravagance of an elite lifestyle of luxury. It's intended to alienate Rachel and contrast with her humble, hard-working, honest sensibilities, but after two or three of these, I don't think it's quite having that effect. Wu (TV's Fresh Off the Boat) is a charming, loveable lead, and the film has fun, colorful characters played by Awkwafina (Ocean's 8) and Ken Jeong (The Hangover trilogy), who amazingly doesn't overstay his welcome. The production design and costumes are sensational and might even get some Oscar attention. Crazy Rich Asians is a fairly formulaic but pleasant enough movie, and the fact that an all-Asian cast rom-com is slotted as a summer movie is a positive sign. The end results are a fizzy fantasy repackaged but still entertaining and without a sense of pandering. Nate's Grade: B-