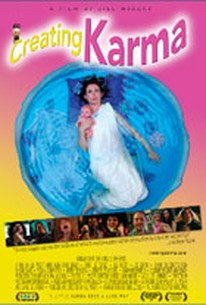 CREATING KARMA, a film about an uptight corporate climber who becomes a poet after losing her job and moving in with her wacky new-age therapist sister, is a narrative comedy feature by first time screen director Jill Wisoff. It will have its US Theatrical premiere Oct 16-22 at the Laemmle Grande in Downtown Los Angeles. Cast includes top billed star Karen Lynn Gorney, dancing diva co-star of Saturday Night Fever fame, esteemed actor Joe Grifasi and talented newcomers.Co-written by Jill Wisoff and Carol Lee Sirugo, two character actresses who decided to write a screenplay that has good parts for funny women (Carol plays the title character and Jill the sister), CREATING KARMA includes songs by Jill Wisoff (Welcome to the Dollhouse songs/score; co-star in Todd Solondz's Fear Anxiety & Depression) and music by Joel Diamond (The Believer, Milarepa).CREATING KARMA is the winner of the 2008 Best Feature award at the Broad Humor Film Festival. Q&As with director and cast members will follow the opening Friday and Saturday evening screenings during CREATING KARMA'S premiere week. --© Official Site

Scarcely have five minutes passed in Creating Karma before viewers may start to suspect they are the victims of an elaborate Andy Kaufman-esque goof. Surely that's the most logical explanation for such an abrasively unpleasant comedy.

A picture so emotionally, comically and, yes, karmically out of touch with the real world -- not to mention the sheer basics of filmmaking -- that watching it feels as if you're being Punk'd, movie-style.

The final product is so bad it's more likely to cause its intended audience to swear off comedy than to demand more.

Every once in a while, along comes something so aggressively in-your-face awful that you start vehemently giving the screen the finger five minutes into it.

There are no featured audience reviews yet. Click the link below to see what others say about Creating Karma!