The Creature Walks Among Us1956 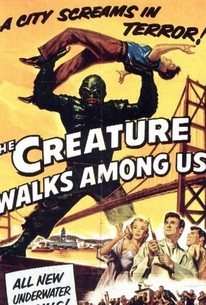 The Creature Walks Among Us Photos

Filmed in 3-D, this sequel to Revenge of the Creature finds the monster captured and brought to America for study. When a fire damages the creature's gills, a kindly doctor agrees to perform an operation so the creature can breathe air and live.

Ricou Browning
as Creature
View All

Critic Reviews for The Creature Walks Among Us

The happenings of the Gill Man, and how he comes to walk among us, are there more to flesh out the story of a toxic marriage than to serve as the main narrative thrust.

A terrible horror flick that I liked anyway. Scientists speed up evolution to turn the gill monster human. The manfish is almost likable. Ultimately, the film is not.

Among the most underrated entries in Universal's diverse monster catalog.

Third in trilogy of Creature movies is best as monster is captured, experimented upon to be turned human.

Third and last in the overrated Creature series.

"the Creature series crawls to a close"

Audience Reviews for The Creature Walks Among Us

Third entry in Universal's Monster series Creature of the Black Lagoon series still has the power of the first two classics, but this one lacks substance. Where the first two succeeded in creating something wonderful, frightening and above all classic, this third effort is a good conclusion, but it lacks in parts. I enjoyed this film very much, and I did think that it was a perfect conclusion, but of the three films, this is the weaker ones. The concept was a good one, but unlike the other two, this one lacked any real thrill, suspense and it was pretty slow in some parts. The acting on the other hand, is wonderful, and makes up for the slight lack of substance to the overall story. However as far sequels are concerned, The Creature Walks Among Us is a pretty good conclusion despite its flaws. Fans of the first film will most likely enjoy this third and final entry in the series. The special effects are wonderful and like all the others in the series, it's one of the high points of the film. The film is entertaining for what it is, and it does have the elements that made the first two memorable, but the films feels a bit less inspired this time around. I felt like the plot was not as elaborate, and the concept, though good, could have been very much improved. For what it is, The Creature Walks Among Us is a good final entry to a classic franchise. Even though it's less strong than the firs two, this sequel is still very much entertaining and a must see for classic horror movie fans.

The synopsis says that this was the third Creature from the black lagoon movie, but I thought it was the second, oh well. This movie is a lot like the first, but slightly worse.

In the third and final installment of the "Creature" trilogy, it is clearer than ever that the real monsters are the scientists themselves, with their constant prodding and poking of nature. The Creature is bestial, but no more evil than a wolf or a lion, when you come down to it. He is a natural part of his landscape. But Man is not content to leave him there. In the first movie, the scientists didn't really know there was a living Creature. That story was one of survival...kill or be killed. In the second film, Man is not content to let the Creature live his isolated existence, so he is captured, brought to civilization and displayed like a sideshow freak. In "Creature Walks Among Us", science now thinks it can "improve" the Creature. As one might expect, the results are tragic. Millionaire scientist Bill Barton is obsessed with capturing the Creature and "tweaking" him. Barton himself is a seriously unbalanced man...abusive to his beautiful "trophy" wife and insanely jealous when she is in the company of other men. Barton is the ultimate control freak and as his hold over his wife weakens, he increases his control over the Creature, capturing him. When the Creature is severely burnt by a fire, Barton and his team of scientists convert him into a hulking, ungainly land beast that even wears clothes. The "land" Creature is a pathetic sight and evokes tremendous sympathy. Despite the constant babbling of the egg-heads to the contrary,the Creature is not meant to be a land dweller. Graceful and natural in the water, he is a stumbling, confused brute in the air. Yet his instinct always guides him back to the water where he belongs. As Barton's marital and mental condition deteriorates, it is also clear that humans are more purely hateful, grasping and neurotic than animals. Finally, both the Creature and Barton erupt into violent conflict. The movie has its slow spots but is extremely well-directed, almost like a film noir. The scene where the Creature catches fire is breath-taking, but it's the haunting last scene of the movie that will stay with you. At the end, there is nothing "monstrous" about the Creature anymore. He is a victim, pure and simple. Recommended.

The first Creature film has been one of my favourites since I was twelve years old, but it wasn't until the advent of DVD that I caught up with parts 2 & 3 ... While RETURN OF pretty much mined the same vein as the first film, WALKS AMONG US sets out to do something entirely different. In destroying the Gill Man's gills and inadvertently activating the Creature's vestigial lungs, the troupe of interfering scientists, led by a slightly whacked out Jeff Morrow, cause the Creature to jump forward to the next step on its evolutionary pathway. Interestingly, it's not just the Creature's appearance that changes (it seems to bulk up like a football player, for some reason) but also its behaviour. It seems to acquire some moral values. As long as the scientists treat it well, the Creature is perfectly docile, even obedient. But when Dr Barton kills the slimy Jed Grant in a jealous rage, the Creature loses its temper and sets out to specifically punish Barton for the crime. Once it's killed Barton, it wanders away from the compound and stands staring out to sea, enigmatically. It's hard to fathom who this picture was intended for. Surely not the usual drive-in crowd of rowdy 1950s teenagers. Would they sit still for the "dramatic" scenes of the Barton's marital strife? Would they grasp the Creature's newfound moral outrage at the sight of a senseless murder? Probably not. So in that respect, WALKS AMONG US is that rare creature. A horror movie, with mature themes in search of an audience. Did I like it? Yeah, I suppose. But in the final analysis - too much soul-searching and not enough violence.

The Creature Walks Among Us Quotes