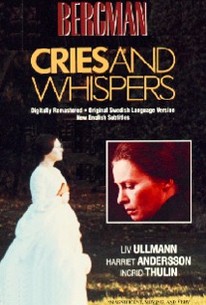 This grim but unforgettable film stars Liv Ullman and Ingrid Thulin as the sisters of dying cancer patient Harriet Andersson. With her two sisters wrapped up in their own problems, Andersson turns to her housekeeper Kari Sylwan for comfort; Sylwan has herself suffered the death of a child.

Rosanna Mariano
as Agnes as a Child

Lena Bergman
as Maria as a Child

Monika Priede
as Karin as a Child
View All

News & Interviews for Cries and Whispers

New on DVD & Blu-Ray: Interstellar, The Imitation Game, and Wild
Through Bergman’s Past, Brightly
Legendary Director Ingmar Bergman dies at 89

View All Cries and Whispers News

Critic Reviews for Cries and Whispers

The much-vaunted color symbolism is so obvious as to be almost charming in its simplicity, and the gothic ambience never really resonates.

Ingmar Bergman's dark vision of the human condition has focused on individuals incapable of real inter-personal communications except on the most primitive level.

Bergman's hour remains resolutely that of the wolf.

It stands alone and it reduces almost everything else you're likely to see this season to the size of a small cinder.

In order to understand why Cries and Whispers is a great film, it must be experienced, not merely watched.

Maybe the "easiest" of Bergman's major films, blunt in its symbolism, literal in its dialogue, unmistakable in its style.

Bizarre and magnificently unnerving in its configuration of human emotion, there's a palpable discomfort to Cries and Whispers, with Sven Nyqvist's impressive cinematography gazing with unwavering patience into the faces of its four females.

The cumulative moments, the reality of each fantasy and the phantasmagoria of existence combine for a work of genius -- certainly the most complex, the most perceptive and the most humane of Bergman's works to date.

"One of the most perfect works - in the form - and disturbing - in the content - of the Swedish filmmaker".

Some have called it the most painful movie he ever made, and it is easy to see why: the three sisters at the center have lost the wisdom of compassion and replaced it with unending pathos.

Starring Sweden's best actresses, this is one of Ingmar Bergman's undisputed masterpieces, which was nominated for the Best Picture Oscar

Audience Reviews for Cries and Whispers

Gorgeously filmed, and emotionally resonant. Not the best Bergman film I've seen, but a great film still. Frightening, hypnotic, contemplative, and even somewhat disturbing. A good film for discussion.

In a perfect demonstration that horror and trauma are the stuff of real, everyday life and not the macabre vision of fantasists, Cries and Whispers marked Bergman's recovery as one of Europe's greatest film directors. Like most Bergman films, Cries and Whispers is concerned with death, the suffering before death and the re-evaluation of life that death brings. It centres on three sisters: one dying of cancer, another trapped in a repellent marriage, and the last engaged in an uncomfortable affair. Moving between these three women is the maid, who tends the dying woman in her agony and, in one stunning scene, holding her to her naked bosom like a mother holding a child. It is not, then, a barrel of laughs. Bergman films are not often for casual viewing, and I certainly won't be taking this one home to watch with my mother. Like a great classical composer, Bergman uses contrast to enormous effect. Muted sounds which force you to strain to listen are punctuated with heart-rending screams from the dying Agnes. The colour scheme is a disquieting red, fading into pastoral greens and blues as the women reminisce about their younger life. The characters also contrast uncomfortably. The two younger sisters, Karin and Maria, are sitting the deathwatch for their sister, but their task arouses no compassion in them. They are appalled and repelled by their sister's suffering, but they will not hold her hand or comfort her. The mutual dislike for each other is palpable. This contrasts with the simple humanism of their maid Anna ? whom they callously talk about firing, once their sister is dead. Set in the late 19th Century, the story flits intermittently between present and past, fleshing out the motivations and the stories of the sisters. One of these flashbacks confronts the audience with one of the most disturbing image in cinema, a repressed Karin cutting her vagina with glass to avoid sex with her husband. Only a director of Bergman's calibre could make such a film riveting. Yet riveting it is. Bergman gets sensational performances from his four main leads; regulars Liv Ullmann, Ingrid Thurin and Harriet Andersson and a majestic, understated Kari Sylwan. To call this film Ibsenesque would be a slur on the originality of Bergman's vision. It is a testimony to his genius that this may not be his best film, yet it is one of the most striking films in modern cinema. I cannot recommend it highly enough.

Another beautiful film from Bergman. We will all continue to miss his work.