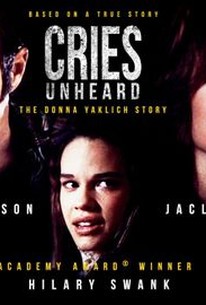 In this made-for-TV drama, Donna Yaklich is visited by her son in the correctional facility where she will spend many years. There she explains the terrible circumstances of her incarceration. Her trouble began when she fell in love with Dennis, an upstanding and seemingly stable police officer. Unfortunately, she discovers that Dennis, an obsessive weight-lifter is regularly taking large doses of steroids. These drugs not only bulk up his muscles, they also make him dangerously aggressive and verbally abusive. Afraid for herself and her children, Donna tries to leave Dennis, but he refuses to let go. After many skirmishes and futile attempts to leave, Donna feels that she will only be free when he is dead.

Gary Hudson
as Steve
View All

There are no critic reviews yet for Cries Unheard: The Donna Yaklich Story (Victim of Rage). Keep checking Rotten Tomatoes for updates!

There are no featured reviews for Cries Unheard: The Donna Yaklich Story (Victim of Rage) at this time.