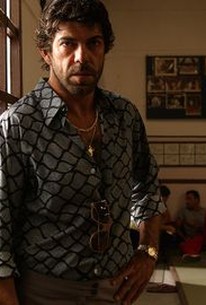 Giancarlo De Cataldo's best-selling tale about three lifelong friends effectively take control of organized crime in modern-day Rome comes to the screen in this sweeping crime drama from director Michele Placido. Libanese (Pierfrancesco Favino) is the cold-hearted leader of a juvenile delinquent trio that also includes undyingly loyal Freddo (Kim Rossi Stuart) and power-hungry Dandi (Claudio Santamaria). After kidnapping and casually murdering a baron (Franco Interlenghi), the scheming friends soon form the shady alliances with the local gangsters, corrupt cops, and secret service members that will allow them the opportunity to effectively corner the market on heroin sales. Meanwhile, determined Inspector Sciloja (Stefano Accorsi), who has made it his goal to bring Libanese and his cronies to justice, stealthily manages to trace back the marked ransom money from the baron's kidnapping to Dandi's girlfriend Patrizia (Anna Mouglalis) - an alluring call girl whom the inspector soon finds himself falling for. But Inspector Sciloja isn't the only one to fall under the spell of a female who seems strangely out of his reach. On the other side of the law, Freddo becomes enamored by the decidedly pure Roberta (Jasmine Trinca), whose attempts to educate the smitten thug in the beauty of the Italian Masters seem to be made in vain. In projecting a fictionalized tale of murderous criminality against the larger backdrop of Italy's turbulent social history during the waning decades of the 20th Century, director Placido strives to craft a film that is not only entertaining, but historically relevant as well.

The universal nature of crime -- and its dark appeal -- is driven home with bullets and bravado.

In short, Romanzo Criminale is interesting at first before overstaying its welcome and growing ever more tedious.

An ambitious, bloody and engrossing work.

Revenge is a dish served once too often in Romanzo Criminale, an Italian crime epic that runs out of appeal well before it runs out of ammo.

It is very murky stuff, and Placido could and should have explained the conspiracy theory a little more. Great performances, though, from Kim Rossi Stuart and Jasmine Trinca as his forlorn lover Roberta.

The storytelling here is murkier than required, causing the pace to flag alarmingly in the second half.

It's hard to get much juice when it's all quick slice-and-dice in the first half-hour. . . . the moral slipperiness between criminal and politician, thug and cop, just doesn't ooze out here beyond all the blood.

In his eighth directorial effort, Romanzo Criminale, Placido takes aim at terrorism in his country during the 1970s . Though the proceedings are fascinating and powerful, it's unable to maintain momentum throughout its over two hours running time.

The electrifying promise of the opening scenes gives way to tedium.

A rowdy, rollicking throwback to the '70s "poliziotteschi" crime genre... you'll have heaps of fun until it disappears from your mind (right around the closing credits).

A group of small time street punks use violence and intimidation to rise to the level of the crime lords of Rome during the 70s and 80s. A gang related crime story intertwined with the actual events of the time, all set to a soundtrack of contemporary hits shows Romanzo Criminale's aspirations to being Italy's answer to Goodfellas, but it falls rather short of Scorsese's masterpiece in terms of grittiness and sophistication. It has the prerequisite violence and hard boiled characters, but its one note pacing and episodic script makes it feel rather more like a crime based soap opera than a tough examination of the criminal mentality. The choice of music is also a little too Heart FM and the scenes that intercut news footage from the time don't quite gel together properly, making it seem more exploitative than informative. It is well played and fast paced enough to make it slickly entertaining and is certainly worth a couple of hours of your time if you're a fan of the genre. But it was a mistake comparing it to Goodfellas and The Godfather because it was never going to measure up to those indisputable classics.

Friends since childhood; Libano, il freddo and il dandi. three hoodlums who share an appetite for thrills and easy money, start a vicious attack to take control of the city. Michele Placido is primarily an actor, a very good one, he is not too sharp at the director's seat; his film is overlong, a bit stylistically plain and even feels somewhat fragmented, however, it has an interesting background information, and the acting is well done. It's not only a gangster movie, but a slice of italian history, showing the rise of 'Banda della Magliana' the chiefs of the underworld in Roma, their chess-like strategies, and their links with notorious and devastating rebellious acts like bombings and the kidnapping and murder of prime minister Aldo Moro by the red brigades.

A very different style gangster film, with a deep look into all the characters involved. Quite fast moving, which left me a little lost in parts, but extremely well acted and ultimately a great film. 4 STARS

Crime Novel? More like Crime Epic. This Italian gangster flick spans the 70s and 80s following the lives of a childhood gang who become the most wanted of the criminal underworld. Unfortunately it takes itself too seriously, lacking the style of a South American gangster flick, the polish of an American gangster flick and the wit of a British one. You also need to have a good appreciation of Italian political history to see this movie as anything other than a promising idea that becomes a pointless bore.