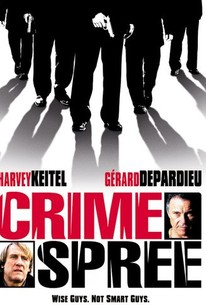 Franco-American relations have never been as strained as they are in this heist comedy. Crime Spree stars Harvey Keitel as Frankie, a brutal Chicago gangster accidentally targeted by six bumbling Parisian burglars sent to the windy city to rob jewelry. But when they anger Frankie, the crooks also attract the attention of his rival mob and the FBI. Johnny Hallyday and Gérard Depardieu co-star.

Sal Figliomeni
as Nicky The Rake

Cam Natalie
as Half Tooth Tony

Reginald Doresa
as Eddie The Hare

Richard Bauer
as Man on Phone

The most striking thing one might note about Crime Spree is just how it manages to make so much look bad while adding up to so little.

Funny? Not quite. Thrilling. Not really. So what's the point?

Mirman seems lost in the uncomplicated, formulaic material of Crime Spree. It's as if he wasn't really sure where he wanted the film to go.

The only points of interest for some of us in this phoned-in film are the Toronto locations.