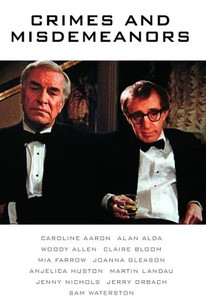 Considered an important entry in filmmaker Woody Allen's body of work, and certainly one of his most interesting pieces, Crimes and Misdemeanors is an alternately comical and dramatic examination of scruples as it follows two parallel storylines that manage to connect by the story's end. One follows the exploits of a philandering optometrist (Martin Landau) who is trying hard to break off his relationship with an obsessive, overly dependent woman (Angelica Huston) who blackmails him into remaining with her. Her conniving leads to tragedy. The other plotline deals with a depressive documentarymaker (Allen) in love with his producer (Mia Farrow). He is working on a film about her selfish and arrogant employer, a popular television comedian.

Jerry Zaks
as Man on Campus

Anna Berger
as Aunt May

News & Interviews for Crimes and Misdemeanors

View All Crimes and Misdemeanors News

Critic Reviews for Crimes and Misdemeanors

Woody Alton's films alternate between the comic, in which he himself stars, and the serious and even solemn, which he does not Crimes and Misdemeanors successfully combines both styles.

It is both a civilised comedy with iron in its soul and a serious examination of our inner fears that also manages to be very funny.

The overall 'philosophical' thrust -- that good guys finish last and that crime does pay -- is designed to make the audience feel very wise, but none of the characters or ideas is allowed to develop beyond its cardboard profile.

The structural and stylistic conceit is that when Landau is onscreen, the film is dead serious, even solemn, while Allen's own appearance onscreen signals hilarious satire and priceless one-liners.

Dramatically, the film seldom fulfils its promise, and its pessimistic 'moral' -- that good and evil do not always meet with their just deserts -- looks contrived and hollow. Intriguing and patchily effective, nevertheless.

The movie's secret strength -- its structure, really -- comes from the truth of the dozens and dozens of particular details through which it arrives at its own very hesitant, not especially comforting, very moving generality.

Woody Allen's writing hypnotizes me, it's no secret that he's a much better writer than director. This film has incredible reaction acting. [Full review in Spanish]

At times the movie observes, patiently, the characters and their predicaments, seemingly going nowhere.

Among other comedians and gag writers, Woody Allen is known as the master craftsman -- the Albrecht Durer of neurotic urban jokes.

Audience Reviews for Crimes and Misdemeanors

I coincidentally happened to watch this on Woody's birthday, and I can't think of a better way to celebrate the man than by watching one of his finest films. In one of his finest films to blend comedy and drama, we get a superb meditation on choice, morality, fidelity, and the consequences of such things told both humorously and tragically. With the dramatic story, we get wealthy society man Judah Rosenthal whose ex-mistress is planning to expose his marital and financial indiscretions. He finds himself torn between taking the advice of his rabbi or following the propositions made by his mob-connected brother. Comedically, there's the story of filmmaker Cliff Stern who is torn between making an important work full of integrity or selling out to make a commercial piece that flatters a man who doesn't really deserve it. Yeah, the two stories have a big contrast in terms of the immediate impact of things, but the repercussions of things are matched in the weightiness of ow it'll all end. This really is a joy to watch, even when it gets dark and heavy. It's impeccably written, wonderfully acted, very compelling, and succeeds with both the drama and the comedy (some of the best laughs being the interactions between Cliff and his niece). And on top of that, the climax and final monologue are simply perfect. I very highly recommend this masterpiece.

Perhaps this is a good movie - after all 90% of reviewers like it. I'm in the 10%. Is the world that full of MD's who get away with murder, comedians who are not funny, filmmakers who cannot make films, marriages that are farces? I guess I would prefer my movies to offer me hope instead of realism.

"Sleeper" was and has been my favorite Allen film, always light, breezy and fun, but I haven't seen them all and now this dark rumination forces me to alter my original opinion. The acceptance here of dark forces roaming the void is unavoidable and comedy becomes ... disposable, or at best only momentary in a sea of sadness. Must see for Allen fans.

Somehow this Woody Allen film truly surprised me. There wasn't something I could outright point to and use as an exact example, but this film isn't the conventional Allen film and maybe not a conventional film on its own. Though Allen would later try to fuse comedy and drama with his film Melinda and Melinda, he failed in many ways to be poignant with the drama and anything except quirky with the comedy. This film separates the two stories by keeping it between two completely different people and storylines. I think the reason so many people embrace this while not identifying with the bevy of his other work, is that it doesn't always fall into the obscurity category. Allen always makes his films about people and their morals, the way they throw them away for love, money, dreams or keep them and suffer. He recycles plots and characters with ease and that irks some people. This film cannot be replicated, mostly because of the tour de force performance from Martin Landau. Completely unrecognizable from his Oscar winning performance in Ed Wood, Landau is an oddly subtle yet extraordinary character, who lies easily enough to his wife and children while keeping company with an overly dramatic mistress (Huston) who has a dangerous wish to upend his life and reveal his frivolous affair to his do gooder wife. On the other end of the spectrum is Allen's character who is trying to get out of his platonic marriage and is hurt by the actions of a woman he loves but who is spending her time with a man he personally reviles. Much of the comedy belongs to the way Allen's character satirizes Lester (Alda) in a documentary he is making. Alda acts as a pretentious comedic genius who doesn't like being shown in a negative light, and seduces every woman with his fame and greasy persona. Alda is by far the greatest presence in the film and the loudest, while still letting Allen be the grieving martyr. Really, it's not that either storyline is better or less equal to one another, it's that they work so well together to form a film that wrenches a decent emotional response while still relaying the message that all crimes are punished and no evil goes unburdened throughout people's lives, while also showing the comedy in neurotic people's desperation when other people's crimes interfere with their happiness. It's so hauntingly good and yet unspecific that I can take so many meanings from this and be happy with them all. Love this Allen film more than many others.