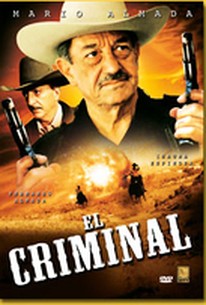 This tortilla Western has a story based on the lyrics of a ballad, and stars Fernando Almada as Jesus Coronado and Mario Almada as Demetrio Coronado, two brothers in real life who make approximately eight of these films a year. This time Jesus has just served a 10-year prison sentence, is minus a leg, and as he returns home with a new model horse and gun, flashbacks bring the story up to date. Demetrio and Jesus had to defend their property against villains who not only wanted the hacienda but also wanted the woman Jesus planned to marry. Mineral deposits on the land raise the greed level of the desperadoes to an unbearable intensity, and they attack, strewing corpses right and left until only the wounded Jesus remains to face a prison sentence. Along the way to this mayhem and Jesus' revenge, there are an inordinate number of songs performed by Tex-Mex groups like Los Cadetes de Linares. ~ Eleanor Mannikka, Rovi

There are no critic reviews yet for Criminal. Keep checking Rotten Tomatoes for updates!

There are no featured reviews for Criminal at this time.