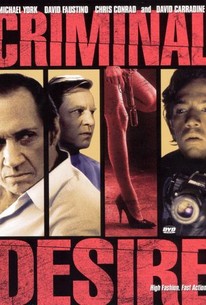 A private eye gets a startling perspective on the sordid underbelly of the ad game in this thriller. Montaghe (David Carradine) is a billionaire business tycoon, and when his daughter disappears under mysterious circumstances, he hires Darrel Chisum (David Faustino), a hard- bitten but streetsmart detective, to find her. Chisum's investigation leads him to Dick Bunche (Michael York), the unscrupulous owner of a large and powerful advertising agency; certain Bunche knows more about Montaghe's daughter than he's telling, Chisum wants to get an inside perspective on what goes on at Bunche's agency, and persuades his friend Erik Denham (Chris Conrad), an out-of-work ad man, to infiltrate the organization. However, Denham and Chisum soon find that Bunche's secrets are deeper and more sinister than they ever imagined.

if you happen to read the one quite positive review on IMDB for the film you should probably take that review with a grain of salt.

There are no featured reviews for Criminal Desire at this time.