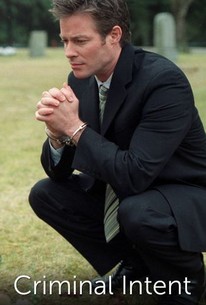 No sooner has entrepreneur Devon Major (Sebastian Spence) emerged from a messy divorce than he is accused of murdering his ex-wife. Astonishingly, Devon requests that his wife's divorce attorney Susan Grace (Vanessa Angel) represent him at his trial. Despite Susan's avowed hatred of Devon, she agrees to take the case, conferring with District Attorney Kirsten Sorenson (Linda Purl) to get additional information on her client, who is simultaneously being investigated on a money-laundering charge by US treasury agent Mark Fairfield (David Palffy). It turns out that some extraordinary clever person has cooked up an elaborate hoax in order to literally get away with murder and robbery--but who is it, and how do Kirsten and Mark figure into the Hitchcock-like denoument? Made for cable, Criminal Intent was first telecast July 8, 2005, on the Lifetime network.

There are no critic reviews yet for Criminal Intent. Keep checking Rotten Tomatoes for updates!

Not bad, not great. So-so acting.

A whodunit. The movie throws out hints at who killed Devon's wife, and we, the movie watchers have to decide which is feasible. Is it the husband? the mob? the assistant? In the end, none of the possibilities is very feasible in my eyes.