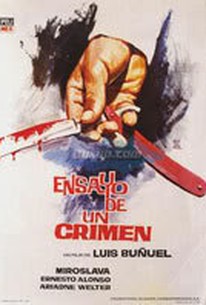 This Mexican-filmed black comedy (distributed in the U.S. seven years after its initial 1955 release date) is one of the minor but no less characteristic works of director Luis Buñuel. The film begins with Archibaldo (Ernesto Alonso) being triggered by a music box into a lengthy reminiscence of his childhood. It was an average, everyday incident, one that undoubtedly has occurred to us all: Archibaldo was caught dressing up in his mother's clothes by his governess, who was then instantly killed by a revolutionary's bullet before she could tell on him. The experience proved to be Archibaldo's "first rush," and he spends the rest of his life trying to re-create the sexual euphoria of that moment -- by murdering attractive women. Buñuel's characteristic perverse black humor then adds a twist, which prevents Archibaldo from fulfilling his desires. Perverse, but darkly funny, Ensayo de un Crimen is a slyly shocking delight. ~ Hal Erickson, Rovi

Carlos Riquelme
as Chief of Police

Andrea Palma
as Cervantes
View All

This is what makes Archibaldo so fascinating. It expresses one simple story idea. It goes straight ahead, sequence by sequence, and it never loiters or takes a wrong turning.

Against a background of revolution and restoration, Catholic mysteries and aristocratic manners, Buñuel unfolds, in images akin to Freudian X-rays ...

Though it's 22 years late in arriving, The Criminal Life of Archibaldo de la Cruz is the only new movie in town about which I can say that it mustn't be missed.

This is the closest Buñuel ever came to directing a bona fide suspense thriller.

Buñuel is still able to put some bizarre -- and very funny -- personal touches on this story of a man obsessed with the idea that the music box he owned as a child has the power to kill.

The central work of Buñuel's career, a midpoint between the early savagery and the later urbanity

Perhaps the lightest and most purely playful film of Buñuel's career. It's an oddly charming black comedy dressed up as a kind of thriller.

It never amounts to more than a cheaply made one macabre joke movie that was only slightly amusing and only somewhat more effective as satire.

An enjoyable - yet perfunctory - dark comedy that does have an interesting protagonist (with murderous desires that tell a lot about the nature of his misogyny) but makes me think that Buñuel probably only made it because he didn't have anything better to do at the time.

terrific pitch black comedy about a would be serial killer whose plans always go awry. notable as the last film of miroslava, who was cremated soon after her mannequin was incinerated in the film

"The Criminal Life of Archibaldo de la Cruz" may be Luis Bunuel's most underrated film, and it's certainly among the best of his Mexican period. Buñuel's early movies always get scoured for hidden flashes of perversity, but no such labor is required with "Archibaldo de la Cruz." In fact, this droll tale fits quite neatly alongside "The Exterminating Angel" (where people can't manage to leave a party) and "The Discreet Charm of the Bourgeoisie" (where people can't manage to eat dinner). In this case, the elusive goal is murder. As a spoiled child of privilege, young Archibaldo is shown a family music box which allegedly causes an enemy's death when played. He experimentally cranks it while wishing for his nanny's death. A moment later, a revolutionary's stray bullet shatters the window and kills her. The boy is enthralled. This launches a long-time pattern of Archibaldo pursuing murder plans, only to have outside forces intervene first. Still, he assures himself that he is somehow responsible for the deaths. Hence the film's ironic title -- he achieves a "criminal life" in mind only. Individual scenes also have the classic Bunuel touch. There's a macabre daydream with dripping blood, and a second fantasy with atmospheric smoke, a stabbing and a glass of milk (Archibaldo shuns alcohol). Nattering American tourists are derisively portrayed. And recurrent shots of ominous straight razors can't help but recall what may be cinema's most notorious use of a razor ever: the sliced-eyeball image of "Un Chien Andalou." But the most deliciously warped sequence comes when Archibaldo gets ahold of a mannequin modeled after his gal Lavinia. Bunuel has a ball using both the actress and her double in the same scene (they even share underwear!), confusing both his audience and Archibaldo. The mannequin's eventual fate is just as twisted. The film's biggest flaws are simply a matter of money. The production values are crummy. The actors are bland, unknown and uncharismatic. And the horrid organ score sounds like stereotypical music from a vintage soap opera. But if Bunuel had tackled this same script 10 years later, we would have one more black-humor masterpiece. Note: The subtitles in the version I saw were seriously deficient. Not only was the white text occasionally unreadable, but only about 60% of the dialogue was translated!

Archibaldo De la Cruz is a disturbed man who spends his time plotting the murders of the women he is attracted to. He has a lot of bad blood and malice, but strangely, destiny always interferes when he's about to carry out his obscure wishes. Engrossing and caustic study of a frustrated sociopath.