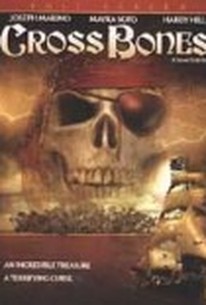 An ancient curse turns a reality-show treasure hunt into a battle against the forces of the undead in this direct-to-video frightener from filmmaker Daniel Zirilli. It's been 100 years since fearsome pirate Red Blood was savagely killed by island natives while attempting to steal their valuable treasure undetected, but his hold over the gold is as strong in death as it was in life. When a modern-day reality television producer picks the very same island as the setting for his pirate-themed television series, Red Blood returns from beyond the grave to lay claim to his booty. ~ Jason Buchanan, Rovi

There are no critic reviews yet for Cross Bones. Keep checking Rotten Tomatoes for updates!

There are no featured audience reviews yet. Click the link below to see what others say about Cross Bones!