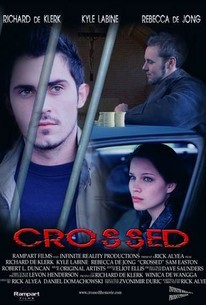 A man who was incarcerated after taking the rap for his best friend is released from prison after serving a two-year sentence, only to find that turning his life around isn't as simple a task as it may have seemed. Mikey Sullivan (Richard de Klerk) may be a criminal, but he lives by a strict code of ethics and would do anything for his best friend - including serving twenty-four months of hard time. When Mikey is released from prison, addiction, anger, and the malaise of a mundane job with minimal pay make his efforts at reformation increasingly strenuous. Now, as Mikey's former associates reveal themselves for what they really are, the illusion that once blinded him becomes an unmistakable truth, and his quest for justice and revenge begins. ~ Jason Buchanan, Rovi

There are no critic reviews yet for Crossed. Keep checking Rotten Tomatoes for updates!

There are no featured reviews for Crossed at this time.