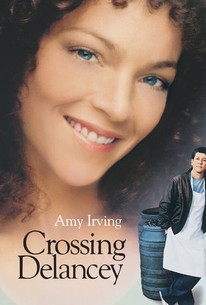 Can an independent, contemporary woman find happiness with a guy who sells pickles? Isabelle Grossman (Amy Irving) is an attractive, intelligent Jewish woman in her early 30s. She has a good job and a nice apartment on the Upper West Side, and she values her independence; she often visits her grandmother Bubbie (Reiz Bozyk), who lives on the Lower East Side and wants Isabelle to meet a nice Jewish man and settle down. Bubbie goes so far as to obtain the services of Hannah Mandelbaum (Sylvia Miles), a matchmaker who finds the "perfect" man for Isabelle: a pickle salesman named Sam Posner (Peter Riegert). Isabelle thinks Sam is a nice enough guy, but she has a hard time imagining herself spending her life with the pickle man, and she isn't sure if she wants to pursue the relationship. However, Sam is taken with Isabelle and goes out of his way to change her mind. Crossing Delancy was directed by Joan Micklin Silver, whose breakthrough film Hester Street also examined Jewish culture on the Lower East Side, albeit from the vantage point of the 1890s.

Christine Campbell
as Woman in Cab

Vickilyn Reynolds
as Woman in Sauna

Myra Taylor
as Friend in Sauna

Jacob Harran
as Guest at Bris

Let me list the things Izzy does to Sam, and ask if you'd stick around.

Crossing Delancey makes the mistake of creating characters who are interesting enough to make us care for them -- and then denying them freedom of speech.

Every scene works in this wonderful but small film.

The implausible and the irresistible come joyfully together.

It's sort of about love taking an independent woman by surprise, but her "independent" life is shown to be hollow at the core.

It's all rather old-fashioned and unlikely, no doubt, but there are enough good jokes and touches of individuality to make Crossing Delancey one of the pleasantest films around.

The film's light tone and Amy Irving's likable performance compensate up to a point for Joan Micklin Silver's technical deficiencies.

Sweet rom-com based on a play (which usually makes - as it does here - for a good script) about two Jewish New Yorkers being set up by the local match-maker. Starring Amy Irving, 12 years on from Carrie, and Peter Riegert in his appealing Local Hero era, this was the favourite film of an ex-boyfriend... awwww...

pulls you in and charms you