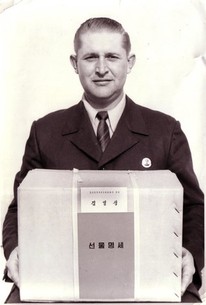 Critics Consensus: An engrossing look at the aftermath of largely forgotten events during the Cold War, Crossing the Line raises questions that will haunt the viewer after the credits roll.

Critics Consensus: An engrossing look at the aftermath of largely forgotten events during the Cold War, Crossing the Line raises questions that will haunt the viewer after the credits roll.

Critic Consensus: An engrossing look at the aftermath of largely forgotten events during the Cold War, Crossing the Line raises questions that will haunt the viewer after the credits roll.

In 1962, a U.S. soldier sent to guard the peace in South Korea deserted his unit, walked across the most heavily fortified area on earth and defected to the Cold War enemy, the communist state of North Korea. He then simply disappeared from the face of the known world. He became a coveted star of the North Korean propaganda machine, and found fame acting in films, typecast as an evil American. He uses Korean as his daily language. He has three sons from two wives. He has now lived in North Korea twice as long as he has in America. At one time, there were four Americans living in North Korea. Today, just one remains. Now, after 45 years, the story of Comrade Joe, the last American defector in North Korea, is told.

News & Interviews for Crossing the Line

View All Crossing the Line News

Critic Reviews for Crossing the Line

The vertiginous play of ideology and identity and the sheer strangeness of Dresnok's experience (as well as that of three other American defectors from the sixties) make this film absorbing; the glimpses of life in North Korea make it important.

A tale of alienation and adaptation both miraculous and strange, but also abduction both psychological and physical.

Crossing The Line lacks the force and power of a strong point of view, but like Gordon's other work about North Korea, it succeeds in revealing what it means for individuals to give themselves over to a collective.

You'll be untangling Dresnok's knotty reality long after you leave the theater.

[The] compelling story and the plentiful high-definition video images of North Korean daily life prove so fascinating that Crossing the Line is riveting.

There are no absolute answers to these questions, but like a brain-tickling puzzle, Crossing the Line keeps us on our toes and digging for more information.

Crossing the Line, like its subject, remains a fascinating and frustrating enigma -- a declassified government report still marred by redacted passages.

Not exactly compelling stuff, especially if you caught the recent 60 Minutes segment about this traitor which covered substantially the same ground.

Audience Reviews for Crossing the Line

An absolutely fascinating documentary exploring the life and history of J. Joseph Dresnok, an American soldier stationed at the North-South Korean border in 1962 who defected to the Communist DPRK. This is a captivating film that really gives the viewer good insight into the daily life of a privileged North Korean. More than that, though, it delves into what would motivate a man to desert his country and start a new life. Highly, highly recommended.

A fascinating story about a man that did the unthinkable. He crossed over into North Korea and surrendered to their ideals and way of life. We are offered a look inside North Korea, one of the most isolated and intriguing places in the world. Dresnok is obviously a supporter of where he lives, and rarely says a bad word against it. The film does give us some interesting tidbits, such as Dresnok's troubled home life and youth, but the main focus is on a man and how he can live in a place most westerners would consider inhospitable. Their is a great emotional weight to the film, as Dresnok talks about his first failed marriage, and both of his marriages + children in North Korea. Underneath the surface is also the complex goings on between Dresnok and 3 other American GI's that defected. Dresnok may be the only one left, but the continuing battle of words between himself and Jenkins makes for one of cinemas great rivalries. It would be easy to call Dresnok brainwashed, if he didn't seem so down to earth and in control. Insightful, emotional, and never judging, this is how a documentary should be made.

[font=Century Gothic]"Crossing the Line" is a documentary about James Dresnok, an American GI who one day in 1962 quietly walked across the demilitarized zone separating South and North Korea, defecting to the North. At the time, he had nothing at home to come back to and perhaps faced a court martial if he stayed. In the present, he has no regrets about his actions. And he was not the only American soldier to defect, either. In the end, the defectors were pawns in the Cold War, used by both sides in the perennial conflict.[/font] [font=Century Gothic][/font] [font=Century Gothic]The documentary which has its fair share of twists is fascinating when focusing on Dresnok but Daniel Gordon who also directed "A State of Mind" does go off the track occasionally. But thankfully he has turned down the rhetoric, leaving the narration to Christian Slater.(Couldn't they have found anyone else, though?) Through archival footage and interviews, the movie gives a good idea of what it was like to be stationed in Korea during the Cold War but in giving a quick history of the Korean War, it does fail to mention that MacArthur invading China only prolonged the conflict. [/font] [font=Century Gothic][/font] [font=Century Gothic]There are some important questions that the movie fails to answer. Did the Americans' presence in North Korea counter any of the anti-American propaganda?(Look, they don't eat babies!) And how many people defected to the South during the same time?[/font]