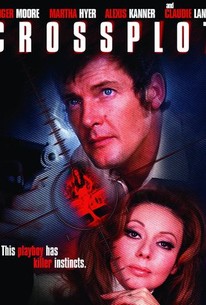 Though Roger Moore was born in England and established himself as star of the British TV series The Saint, Crossplot represents Moore's very first British theatrical film. He stars as an advertising executive swept up in a plot to murder a visiting African statesman. Lensed in "swinging" London, the film is "mod" to an almost depressing degree, obscuring what is at base a solid espionage thriller. Moore ultimately thwarts the villains by decoding a message secreted in a crossword puzzle -- hence the film's title. A climactic shootout in Hyde Park tops this dry run for Roger Moore's subsequent stint as James Bond.

John Lee
as Blake
View All

There are no critic reviews yet for Crossplot. Keep checking Rotten Tomatoes for updates!

There are no featured audience reviews yet. Click the link below to see what others say about Crossplot!