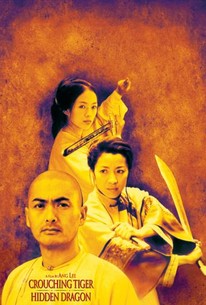 Taiwanese filmmaker Ang Lee took a break from making Western period dramas to fashion this wild and woolly martial arts spectacular featuring special effects and action sequences courtesy of the choreographer of The Matrix (1999), Yuen Woo Ping. In the early 19th century, martial arts master Li Mu Bai (Chow Yun-Fat) is about to retire and enter a life of meditation, though he quietly longs to avenge the death of his master, who was killed by Jade Fox (Cheng Pei-pei). He gives his sword, a fabled 400-year-old weapon known as Green Destiny, to his friend, fellow martial arts wizard and secret love Yu Shu Lien (Michelle Yeoh), so that she may deliver it to Sir Te (Sihung Lung). Upon arrival in Peking, Yu happens upon Jen (Zhang Ziyi), a vivacious, willful politician's daughter. That night, a mysterious masked thief swipes Green Destiny, with Yu in hot pursuit -- resulting in the first of several martial arts action set pieces during the film. Li arrives in Beijing and eventually discovers that Jen is not only the masked thief but is also in cahoots with the evil Jade. In spite of this, Li sees great talent in Jen as a fighter and offers to school her in the finer points of martial arts and selflessness, an offer that Jen promptly rebukes. This film was first screened to much acclaim at the 2000 Cannes, Toronto, and New York film festivals and became a favorite when Academy Awards nominations were announced in 2001: Tiger snagged ten nods and later secured four wins for Best Cinematography, Score, Art Direction, and Foreign Language Film. ~ Jonathan Crow, Rovi

Li Li
as May

Wang Wen Sheng
as Gangster A

Song Dong
as Gangster B

I cannot express to you how beautiful and stunning it is.

Crouching Tiger doesn't so much break new ground as reconfigure the genre with the pomp and ceremony of Western production values and psychological nuance.

The smartest and smartest-looking action movie of the year.

It's abundantly clear that Lee, in conjunction with fight choreographer Yuen Wo-Ping (famed for The Matrix), has brought to these standard tropes his own elevating, near-feline sensibilities.

A firebrand of a movie, bold, dramatic, and haunting.

Ang Lee's dreamlike film transcends its hybrid roots; it's unlike anything you've seen before.

Each scene has very specific, intense stakes involved, which makes them that much more dramatic.

By casting Chow Yun-fat-maybe the biggest marquee name outside the US at the time-Lee found a star who could unite all the elements of this feminist Qing Dynasty epic.

These scenes define their own reality - the performers glide across walls, treetops and ponds while lashing out in full flight - but crucially, never inspire disbelief.

It's at once pulpy and profound, a movie that never forgets to have fun even as it's tackling such straight-faced issues as honor, devotion and compassion.

Words are not enough for me to express how much I adore this film - a deeply poetic, romantic and compelling experience that has a fantastic cast, a wonderful dialogue, one hell of a great direction and some of the most amazing martial arts scenes I have ever seen in a movie.

Ang Lee's Crouching Tiger, Hidden Dragon is a film that combines beautiful cinematography, romance, and tons of great action sequences. I haven't watched a whole lot of martial arts, or wuxia, films, but Crouching Tiger, Hidden Dragon makes me want to watch more films in the genre. Plus, I just started taking Tae Kwon Do classes so I guess that can be considered a requirement. The plot follows two warriors, Master Li Mu Bai and Yu Shu Lien, who must retrieve the legendary sword, Green Destiny, from the clutches of the notorious thief, Jade Fox. The warriors soon cross paths with Jen Yu, the teenage daughter of a nobleman with a secret. Jen soon finds the warrior in herself and teams up with the two warriors to get the Green Destiny back. There is also a subplot that explores Jen Yu's love life. Crouching Tiger, Hidden Dragon is a well crafted film. It does a good job developing the characters and story and is loaded with eye candy. The stuntwork in this films is incredible and the performances in the cast are great. It's a very stylistic film that includes a lot of substance and the two work out perfectly. When I sometimes think about martial arts movies, I get images in my head of a clichéd sensei or master giving wise zen quotes. The film avoids that and focuses more on the story than the martial arts. That's how I interpret the movie. This is a film that people interpret differently due to the ending. Trust me. Those final seconds of the movie are going to stick with you. The script is also fine. I love the dialogue during the romantic subplot. When Jen gets her freak on, they give her some pretty sassy dialogue. The performances in this movie are excellent. There is not one bad actor in this film. I watched the original Madarin dub. I saw a bit of the English dub and wasn't totally impressed. It dumbed down the acting in my opinion. While I enjoyed Michelle Yeoh and thought Chow Yun Fat was awesome, major kudos go to Zhang Ziyi as Jen. This movie kicked off her career. The only other thing I saw her in was Rush Hour 2 but she's been in many other Asian films after this. Anyways, I just loved her as an actress and also as a crush. She starts off as a curious teen and then becomes a great warrior. I'm a sucker for cat fights and she engages in one of the best in cinematic history. Also, the cinematography is exceptional. The landscapes are beautiful. It left me speechless and that's all I can say about it. The pacing started to bug me a little in the begining but toward the climax, it works very well. The romance suplot feels like an entirely different movie. It is also well developed throughout and makes an impact on the glouriously filmed final scene. Zhang Ziyi's chemistry with Chen Chang is perfect. Crouching Tiger, Hidden Dragon is a spectacular film with breathtaking cinematography, memorable performances, a thrilling plot, a great romance, and has amazing action sequences. I need to explore more Wuxia films like Bruce Lee's Enter the Dragon or Akira Kurosawa's Seven Samurai. Regarding Seven Samurai, I have an urge to see it but what seems to put me off is it's run time. I'll have to give it a try since it's a widely praised film. If you haven't seen Crouching Tiger, Hidden Dragon, get to it. You will be entralled by this epic. Thanks for reading my first review of 2012! "Now give yourself up and find yourself again."

For this film, Ang Lee decided to put his career of making Western period epics on hold and instead make a far Eastern histprically based period epic. That's totally cool by me. The story here is a action packed but also romantic epic concerning several plotlines of love and vengeance all connected in some way to a very special (downright sacred) sword known as the Green Destiny. The film is widely known for its stunning visuals and expertly choreographed and executed fight scenes and wire work. I'm kinda on the fence about wire-fu, and like a more realistic type of fight scene, but as longs as it actually serves the story and isn't there solely for the sake of style and flashiness, then I'm totally cool with it. Thankfully, that is the case here, and the gravity bending moves don't actually feel out of place in an otherwise realistic film. This works becuase the way the characters are constructed: we believe their incredible feats to be true because of their supposed mastery of fighting, and also with how the materia lis handled. This film isn't all just cool action and beautiful cinematography though. There's a real story here, filled with substance and deth, and great themes like gender roles and dealing with societal constraints and the effects they can have. Plus, the two main romances are both really good and nicely contrast one another, and everything going on really comes alive thanks to the terrific performances of the cast. The veteran leads are excellent, but their younger co-star Zhang Ziyi really steals the show here in a flawless performance that really got her career off the ground. All in all, this is some really tremendous stuff. It was nominated for a ton of Oscars, and ended up (deservedly) winning 4 of them (best original score, best cinematography, best art direction, and best foreign language film). Too bad it couldn't also have walked away with the awards for picture and director as well. Regardless of all that, you should definitely give this one a watch.