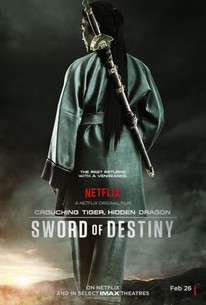 Critics Consensus: Paling in comparison to its predecessor in every conceivable way, Sword of Destiny is a lazy sequel that never justifies its own cynical existence.

Critics Consensus: Paling in comparison to its predecessor in every conceivable way, Sword of Destiny is a lazy sequel that never justifies its own cynical existence.

Critic Consensus: Paling in comparison to its predecessor in every conceivable way, Sword of Destiny is a lazy sequel that never justifies its own cynical existence.

Based on the fifth and final book from the Crane-Iron Series, this sequel to 2000's martial arts phenomenon Crouching Tiger, Hidden Dragon follows a new adventure on the hunt for a legendary sword. Michelle Yeoh reprises her role as Yu Shu Lien from the first film, with Donnie Yen and Harry Shum Jr. co-starring.

The Crouching Tiger, Hidden Dragon sequel Sword of Destiny isn't as thoughtful as its predecessor, but its fight sequences will hold your attention.

By the climax, the action has been reduced to interminable sequences of people banging their swords together and occasionally being ejaculated into the air like digital snowflakes.

Sword Of Destiny suffers endlessly by comparison to Ang Lee's groundbreaking 2000 film Crouching Tiger, Hidden Dragon, for the comparative smallness of its vision, its visuals, and its budget.

With all of the first film's startling beauty and emotional subtlety lost, even Sword of Destiny's established stars look uninspired in their roles.

It has an appealingly inventive, unruly genre party streak running down its figurative back.

It's said Zhang Ziyi didn't want to come back for the sequel unless Ang Lee returned as well. We can see why.

We're all here really to see if Sword Of Destiny was worth the decade-plus wait. It totally was.

Directed by Yuen Woo-ping (who choreographed the fights for the first film), Sword of Destiny feels westernized in every sense of the word.

Nostalgia is nice, but Netflix should just focus on making better content.

The sequel is directed by Yuen Woo-Ping, who choreographed the fight scenes in the original... he's not as prestigious as Lee, and has fewer awards, but the man knows his kung fu.

It's not offensively bad. It's a kid's meal -- safe, but grown-ups will tire of it quickly.

Lackluster retread, yes. But I think I would watch a whole film of Michelle Yeoh simply thinking. Or changing her socks. Her scenes with Donnie hint at what this could've been.

Big shoes to fill and missing the brilliant Ang Lee behind the scenes. The first was a beautiful film with a very strong story, this one lacks a story and a strong visual force. I expected a strong sequel but felt the Weinsteins didn't invest in the story. Donnie Yen sounded great as the replacement lead character but we don't uncover much from his character. The fight scenes are impressive, as is the last confrontation. I would like another sequel to follow this one, exploring characters and focusing on the strengths of the first film. Being a belated sequel you can't help but feel slightly disappointed.

The solid script doesn't try to be a mere copy of Ang Lee's masterpiece (despite a few similar moments here and there), while the visuals are dazzling and the fighting scenes spectacular, although the excess of CGI kills some of the fun and the film ends in a lame last scene.

This movie did not feel Chinese at all. From the very obviously non-Asian forest scenes, to the fact that the actors were all speaking English, to an American-sitcom-feeling fight scene where precious Ming vases teeter precariously around the the two young leads, to Donnie Yen looking like a friggin' COWBOY in his leather hat and bandanna getup... My favourite part about the movie was seeing Harry Shum Jr. in an unexpectedly legit-looking Chinese role -- good on you man! And the young female lead was really pretty and took her role seriously (even if I found it hard to take her seriously with her Australian accent) and I look forward to seeing her in other roles. More complaints: It felt like bits were being taken from generic fantasy tropes (annoyingly, Western generic fantasy tropes) like the creepy priestess in Game of Thrones, and a motley crew of good guy sidekicks who excel more in witty banter than actual fighting. There's also a forgettable main villain and forgettable people who want vengeance against him. Most people in this movie needed to learn how to pronounce Chinese words properly -- much of it was cringeworthy. Bleah. I'm bored with writing this review already.