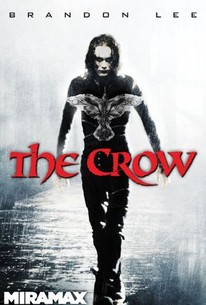 Critics Consensus: Filled with style and dark, lurid energy, The Crow is an action-packed visual feast that also has a soul in the performance of the late Brandon Lee.

Critics Consensus: Filled with style and dark, lurid energy, The Crow is an action-packed visual feast that also has a soul in the performance of the late Brandon Lee.

Critic Consensus: Filled with style and dark, lurid energy, The Crow is an action-packed visual feast that also has a soul in the performance of the late Brandon Lee.

Based on the graphic novel by James O'Barr, this fantasy follows Eric Draven (Brandon Lee), a rock musician who is murdered along with his fiancée, Shelly (Sofia Shinas), by a group of marauding thugs who terrorize the decaying city in which they live. One year to the day after his death (which happens to be Devil's Night), a mystical crow appears at Eric's grave; Eric rises from the dead and, with the bird as his guide, goes on a mission to avenge himself against Top Dollar (Michael Wincott), the leader of the gang who killed him. Star Brandon Lee was killed while filming a scene in which he was shot with a shell from an improperly cleaned gun that was supposed to be loaded with blanks. Like his father, martial arts superstar Bruce Lee, Brandon was fated to enjoy his greatest popular success after his premature death. ~ Mark Deming, Rovi

News & Interviews for The Crow

View All The Crow News

Critic Reviews for The Crow

Alex Proyas's pulp revenge fantasy, based on a comic-book saga by James O'Barr, is dark, moody, and seductively overwrought; it's an amazingly pure expression of morbid adolescent romanticism.

It's a pleasure to welcome The Crow -- a bird of a very different feather.

The Crow, starring the late Brandon Lee, is like one long fright night. Even though it was photographed in color, the edge-of-darkness atmosphere descends on the audience like a shroud.

What's scary about The Crow is the story and the style itself: American Gothic, Poe-haunted nightmare, translated to the age of cyberpunk science fiction, revenge movies and outlaw rock 'n' roll, all set in a hideously decaying, crime-ridden urban hell.

...still a shockingly effective movie, one that plays with mythic ideas while also depicting a gone-to-hell world...

Despite its hardcore demeanor, there's also a surprisingly sensitive streak weaving throughout the film.

I will say that I rewatched it for this project, and was surprised to see how well it holds up. It might be perhaps the most early 90s movie ever made, but unlike, say, Reality Bites, it's in a way that's still cool and stylish.

A first-rate revenge fantasy and a thrilling adaptation of the comic book series on which it's based.

From heartbreak, rage, pain, love, and even brief moments of humor, Brandon Lee brings all the pathos to the table.

Audience Reviews for The Crow

A stylish, abnormally dark and dreary tale of a rock musician (the late Brandon Lee) who comes to life exactly a year after the death of he and his fiance in order to enact revenge on those that were responsible. What could have just been another forgettable, B-grade exploitation flick is enhanced by stunning visual flairs, as well as a rare passionate lead performance. It really is a shame Lee died before he got to see the final cut of this film, since he is simply sensational for every minute of its running time. Of course, it goes over-the-top throughout and its nihilistic, dystopian society that the original comic book painted starts to wear on one after a while, but these flaws are minor. If anything, see it for Lee's spirited performance, as well as some fantastic action scenes and some eye-popping visuals.

A dark, eerie, ominous feel from Alex Proyas, but a classic masterful performance by the late Brandon Lee. A cliche plot is covered by the star's excellence and dazzle-filled dialogue and execution. The Crow is a cult-film that continues to fascinate audience's to this day. 4/5