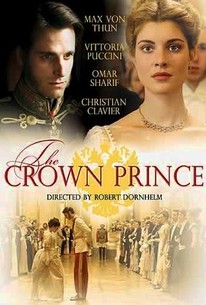 Robert Dornhelm's epic-length period tragedy The Crown Prince takes as its dramatic inspiration the heart-rending and irrepressibly romantic tale of Rudolf (Max von Thun), Crown Prince of Austria heir to the Habsburg monarchy during the late 19th Century. The young man's story culminated in the notorious Mayerling tragedy of January 1889; Dornhelm travels back to the years immediately prior for an operatic exploration of the events leading up to Mayerling. The film begins with Rudolf's marriage - an arranged marriage that leaves the young man miserably unhappy and emotionally isolated. In time, the dissatisfied Rudolf commences a tempestuous affair with Baroness Mary Vetsera (Vittoria Puccini), and the two promptly fall in love with one another. Yet the crowned royals frown upon this forbidden romance, forcing young Rudolf into an emotional corner - and leaving two desperate acts of violence as his only escape. The film's supporting cast includes Omar Sharif, Klaus Maria Brandauer and Christian Clavier. ~ Nathan Southern, Rovi

Critic Reviews for The Crown Prince

There are no critic reviews yet for The Crown Prince. Keep checking Rotten Tomatoes for updates!

Audience Reviews for The Crown Prince

There are no featured audience reviews yet. Click the link below to see what others say about The Crown Prince!