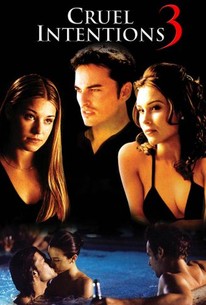 Seduction and betrayal among the teenaged idle rich is once again the order of the day in this, the second straight-to-video sequel to the 1999 hit Cruel Intentions. Cassidy Merteuil (Kristine Anapau) is an outwardly charming but conniving and manipulative student at an exclusive Santa Barbara prep school. Jason Argyle (Kerr Smith) and Patrick Bales (Nathan Wetherington) are two students who have made a bet in which the first to bed Cassidy claims the prize; however, when the contest ends in a draw, Cassidy turns the tables on the boys by setting her sights on Patrick, though it soon becomes obvious that all three have secret agendas of their own.

Not as bad as the second one, (surprisingly), but nowhere near the level of the first one either. At least they were different characters this time - the main character, Cassidy, is a cousin of Katherine's. I say that's a plus because as least it was not messing with the original characters like number two did. Here we just have thoroughly nasty shallow people and the type of story to leave a bad taste in your mouth. At least they layed off the shock value sex a bit. (Although it is still there).

So...I guess sometimes I feel like punishing myself by watching utter garbage. This is one of those times.

Too bad they bring this movie into a trilogy...