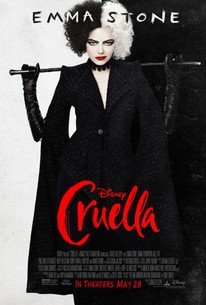 Critics Consensus: Cruella can't quite answer the question of why its title character needed an origin story, but this dazzling visual feast is awfully fun to watch whenever its leading ladies lock horns.

Critics Consensus: Cruella can't quite answer the question of why its title character needed an origin story, but this dazzling visual feast is awfully fun to watch whenever its leading ladies lock horns.

Critic Consensus: Cruella can't quite answer the question of why its title character needed an origin story, but this dazzling visual feast is awfully fun to watch whenever its leading ladies lock horns.

Academy Award (R) winner Emma Stone ("La La Land") stars in Disney's "Cruella," an all-new live-action feature film about the rebellious early days of one of cinemas most notorious - and notoriously fashionable - villains, the legendary Cruella de Vil. "Cruella," which is set in 1970s London amidst the punk rock revolution, follows a young grifter named Estella, a clever and creative girl determined to make a name for herself with her designs. She befriends a pair of young thieves who appreciate her appetite for mischief, and together they are able to build a life for themselves on the London streets. One day, Estella's flair for fashion catches the eye of the Baroness von Hellman, a fashion legend who is devastatingly chic and terrifyingly haute, played by two-time Oscar (R) winner Emma Thompson ("Howards End," "Sense & Sensibility"). But their relationship sets in motion a course of events and revelations that will cause Estella to embrace her wicked side and become the raucous, fashionable and revenge-bent Cruella.

These clothes are the boldest element of a movie that otherwise wears its supposed punk-rock influences like a kid discovering Hot Topic for the first time.

This movie is worth watching for how it looks and sounds and for Emma Thompson...

Cruella is doing enough to be seductively fun and entertaining, at least for the first 90 minutes.

The movie is fun, stylish, and over the top (in mostly a good way), but it struggles to prove that it's more than a muddled cash grab.

Cruella is often fun to watch, but its cavalier reversal of its core character cheapens the very idea of a corrective narrative. It takes a quintessential villain and nuances her character into oblivion.

This becomes repetitive and one-note after you get past how deliciously wicked everyone is.

This soundtrack was wild...Stone was good, but not fantastic.

Once the plot's major twist is unveiled, we're watching a duel between Emma Stone as Estella and Emma Thompson as the Baroness, and the two divas revel in their roles, chewing scenery and striking dramatic poses and just being super fabulous.

The two female leads here are great. The two Emmas.

Gillespie and his team have delivered audiences a suitably wicked and well-acted backstory for one of Disney's greatest villains.

It has trouble making the ride a smooth one back to 1961's One Hundred and One Dalmatians.

There are no featured reviews for Cruella at this time.