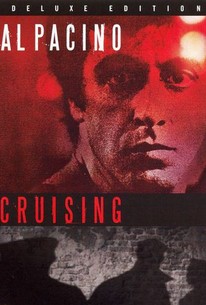 Critics Consensus: Cruising glides along confidently thanks to filmmaking craft and Al Pacino's committed performance, but this hot-button thriller struggles to engage its subject matter sensitively or justify its brutality.

Critics Consensus: Cruising glides along confidently thanks to filmmaking craft and Al Pacino's committed performance, but this hot-button thriller struggles to engage its subject matter sensitively or justify its brutality.

Critic Consensus: Cruising glides along confidently thanks to filmmaking craft and Al Pacino's committed performance, but this hot-button thriller struggles to engage its subject matter sensitively or justify its brutality.

Allan Miller
as Chief of Detectives

Here Steve's 'undercover' status serves as a metaphor for his closetedness (and vice versa) - while murder is committed at the behest of an internalised paternal voice of authority that regards homosexuality as a guilt that must be bloodily expunged.

The principal complaint, artistically, about Cruising is that it is not very clear at the rudimentary level of exposition of character and event. The problem... is in a script that never seems sure enough what it wants to say or prove.

William Friedkin's Cruising is a work of art.

What we're left with is a movie without the courage to declare itself.

This detective melodrama has something to offend almost everyone.

What's left is the framework for a graphic, brutal, sickening film, without the violent effects that might have made sense (however illegitimate) out of the conception.

At its best, this William Friedkin effort is an American giallo and a document of a community just before HIV/AIDS came along and demolished it.

Cruising is rife with laughable loopholes.

A fascinating entry in Friedkin's oeuvre that works best when it's immersed in New York City's queer nightlife and less so when it gets bogged down in dull police shenanigans.

...it's a straight-up thriller, and it works in that regard and as just a peek into another world.

This is a malicious movie from the grim voyeurism of the ungraphically depicted sex to the nauseating and unnecessarily explicit scenes of violence.

Interesting film -- if for no other reason than to see gay stereotypes from the late 1970s and early 1980s. Bold role for Paccino, played convincingly.

With the 80's explosion of homosexuality in the mainstream, director William Friedkin set out to explore the tension that consumed New York during this time. How a fear of the "other" during this anxious period, so easily manifest itself as hate. Now, what I just described above, is fodder for a great film. Unfortunately, Friedkin's final product "Cruising", isn't that great film. It often forgoes the dark and compelling for the shocking and exploitative. Friedkin seems to lend as much grace and finesse to this subject that he clearly has a cursory knowledge of. Meaning of course, he lends incredibly little.What the viewer gets in essence is a clunky gay horror film in which a hesitant Pacino slowly becomes immersed in a seedy realm of the subversive gay world. It's filmed in such a way that it feels like a gay Rome, replete with an all-consuming plague like hedonism that is meant to appall. I mean, why else would Friedkin go to such lengths to make sure the viewer gets treated a nice long fisting scene? Friedkin cuts together shots of a knife being thrust into a man's back with others of a penis being plunged into a man's butt. It is hard to not feel like Friedkin is grimly equating murder with homosexuality. This is even furthered by a certain scene in which blood is seen spurting, ejaculating, on the screen in a theater that plays gay porn. The acts of these deviants are drenched in the blood of countless men. In fact, Friedkin seems so intent on wanting to shock that he ends up not really saying anything of substance. He really only succeeds in propagating stereotypes, fear, and that if a black man in a cowboy hat and jockstrap walks into a room with you, it would behoove you to walk out. I find Friedkin to be one of the more fascinating figures in American cinematic history. When he hits it, he cranks it out of the park. When he misses, he not only wastes a good opportunity, he also seems to throw his shoulder out in the process. It is no wonder that after a disaster like this, it has been an uphill battle just getting himself back in the game.

A compelling look at the gay underground in late 70's NYC, with a complex Pacino performance. Unfortunately, there is ample evidence of studio tinkering, especially towards the end when the whole thing simply falls apart. Too bad.

Friedkin uses the gay leather scene to show NYC as an abattoir where two will go out at night to play a game trading turns as butcher and meat. They often get more than they bargained for when sizing each other up. "Cruising" means hunting for sex-prey-death. The hetero-macho cop world and Gay S&M bars supposedly fetishize this erotic and lonely compulsion more than the "straight" world, which just ignores the mayhem and lets it go on. There's a lot of dumb use of stereotypes; the side of Pacino's character that we should know about is underdeveloped; and some plot jumps are insulting -- to the characters and to our good sense. Eventually, you get the feeling that this foray into a controversial subculture is not really complex and considered as much as it might be another cheap horror show. And as a horror show, it's only unique because it always risks being bigoted and because it's transgressive with sexual identity. The hetero-male viewer shares Pacino's voyeuristic perspective and the female viewer is wondering about what might attract that male viewer. (Karen Allen doesn't get to do much, but she does get to try on her boyfriend's gay gear.) Pacino begins as a sensitive undercover cop and transforms into a violent hunter, who's afraid of either his capacity for affection or his hidden drives. Somehow, his repulsion at the police abuse of a gay sex suitor is the catalytic event that makes Pacino embrace his pathology and enjoy testing the prowess of the killer inside him against that of the serial killer he's tracking. It's an emotional trigger which is not easy to believe. Easier to believe is that he's intrigued with this cruising world partly because he's testing his inclination that "nothing human is alien to me." It should be said that although Friedkin tries to build layers of ambiguity throughout the whole film, he undercuts all that work at the end, in coaching Paul Sorvino -- who's good as the stoic police captain -- to let his last scene fill with emotional facial expressions. The captain's out-sized reaction to another murder pushes the audience too much toward one conclusion: Pacino's character, soon to be detective, has been cursed with a Joe-Estzerhas final twist. Not sure whether what happens to this cop is meant to challenge the male egos in the audience -- as in, how close to aggressive gayness can you stay and still be heterosexual? Maybe it's supposed to show how living through excess-abandon can drive people to not care about one body from another, at least enough to let gender get in the way. Regardless, using different actors, dressed in the same gear, for the killer -- which is both confusing and a cheat in the mystery -- isn't metaphysically intriguing enough to excuse the fact that those same actors are playing the past and future victims. This seems like blaming the victims for enabling the killers, an idea that goes beyond controversial; it's sociopathic, especially since the screams of two victims electronically curlicue into pig squeals. Great soundtrack put together by Jack Nietzsche, great sound design, proper use of Joe Spinell as human horror, interesting Powers Boothe cameo, and sordidly bizarre Bruno Kirby cameo. -- Why did Kirby want to do this? In fact, why did Friedkin or Pacino? ... This question of project choices becomes the most resonant one of the movie! Did they want to prove to themselves that "nothing human is alien to definitely brilliant but securely heterosexual artists"? Or were they being flamboyant heterosexual artists who, believing their own genius for "serious" subject matter, secretly felt they deserved their own chance to do camp?