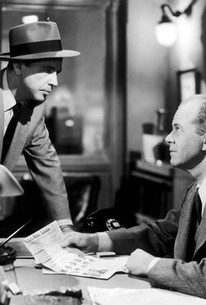 Dick Powell stars in this suspenseful melodrama, directed by Robert Parrish. Rocky Mulloy (Powell) has recently returned from prison, after being pardoned from a life sentence when new evidence clears him from a robbery conviction. Delong (Richard Erdman), a crippled Marine veteran who concocted the new evidence that got Mulloy released, thinks that Mulloy will be so grateful that he will cooperate with him and share some of the $100,000 Mulloy supposedly has hidden somewhere from the robbery. But Mulloy has other ideas -- instead he wants the use his pardon as a chance to bring the real guilty parties involved in the crime to justice and to help out a needy friend who is still in the penitentiary. ~ Paul Brenner, Rovi

This efficient revenge yarn was shot in 22 days.

seriously underrated noir with dick powell in marlowe mode. always fun to see him play a hard guy with plenty of snappy dialogue, as seen in 'murder, my sweet.' terrific russian roulette scene!

Framed for a crime he never committed, Rocky (Dick Powell) is fresh outta' prison and looking for a little payback. Cry Danger is chocked full of all the elements noir fans slobber over. Powell is rock solid and Rhonda Fleming looks absolutely edible.

Average crime drama has competent players and a tight running time with some nice wry humour but it's pretty much run of the mill otherwise.