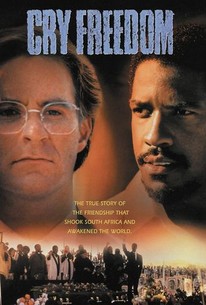 A powerful drama that helped expose to the world the malfeasance of South African apartheid, Cry Freedom chronicles the fact-based friendship between an outspoken white newspaper editor and the South African pacifistic civil-rights activist, Steve Biko. After Biko suspiciously dies, Woods, though forced to flee the country with his family, continues to broadcast Biko's message to the world.

Robert Phillips
as Speaker at Funeral

Gwyneth Strong
as Girl at Funeral

Evelyn Sithole
as Nurses at Clinic

Xoliswa Sithole
as Nurses at Clinic

Garrick Hagon
as McElrea
View All

Attenborough maintains firm control of the narrative, and Cry Freedom is a triumph of dedication.

Washington does a remarkable job of transforming himself into the articulte and mesmerizing black nationalist leader, whose refusal to keep silent led to his death in police custody and a subsequent coverup.

An implacable work of authority and compassion, Cry Freedom is political cinema at its best.

These are fine methods for delivering a civics lesson, which to some extent is what the Attenborough approach is all about. But for a film that aspires to entertain as well as educate, they are less helpful.

For the first half of this movie... Interesting things were happening, the performances were good and it is always absorbing to see how other people live. Most of the second half of the movie, alas, is taken up with routine clock-and-dagger stuff.

In a country busier than Chile with oppression, violence and subjugation, the story of Woods' slow awakening is certainly not the most exciting, or revealing.

For a superior picture about the horrors of apartheid, see 1989's A Dry White Season instead.

As a biopic, anti-Apartheid chronicle, the film is mediocre, but the young Denzel Washington is excellent, rendering an Oscar-nominated performance.

One of the best films to come out of the 1980s. Simply amazing.

A historical document as well as powerful, disturbing drama

Good movie based on actual events in 70's S.Africa. Set during the apartheid an unlikely friendship between a white liberal and a black activist form the basis of the story. Kline and Washington are on top form, but it has a TV movie feel from beginning to end. I usually don't watch this genre of movie, as the depress the shit out of me, but one of my students was studying the book for his literature class so I thought I'd cut a few corners. Cry Freedom is a worthwhile watch, but you will be shocked by the level of cruelty done by the S, African government at that time.

Typically worthy and well-made biopic of Steven Biko and his death at the hands of the racist south african regime from Richard Attenborough. The first half of the film featuring the man himself played by Denzel in one of his best roles works better, as we get to know the man and his motives. It's harder to care about Kline's attempts to escape the country in the wake of Biko's death, but it's still fascinating stuff.

Extraordinary true-life story of friendship between black activist and white newspaper editor in South Africa who told against the backdrop of a turbulent but beautiful land rich in everything but common humanity.