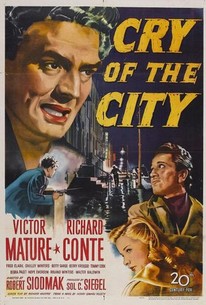 Cry of the City Photos

The opening scene of Robert Siodmak's grim film noir depicts police lieutenants Candella (Victor Mature) and Collins (Fred Clark) observing wounded cop killer Martin Rome (Richard Conte) receive last rites. Though Rome recovers, he still must elude Candella and Collins in his desperate attempt to escape his fate. Rome has two visitors in the hospital: his girlfriend, Teena (Debra Paget), who goes into hiding, and Niles (Berry Kroeger), a crooked lawyer. Niles tries to bribe Rome to take a jewel theft and homicide rap for a client of his since Rome is facing the electric chair anyway. When Rome refuses, Niles threatens to frame Teena as the client's female accomplice. Worried that Candella might find Teena, Rome breaks out of jail and goes to Niles' office to accept the offer, but he actually plans to leave the country with Teena. When Niles reneges, Rome kills him, but not before learning the accomplice's identity and discovering the stolen jewels in the lawyer's safe. Rome finds the accomplice, Rose Given (Hope Emerson), and offers to trade the jewelry for the means to leave the country. She agrees, and they arrange a meeting in the subway, but Rome informs Candella of the plan. When the police arrive, Candella is shot, Rose is arrested, and Rome escapes to meet up with Teena in a church. As he is trying to convince Teena to run away with him, a wounded Candella shows up and tells Teena how Rome uses people and that everyone who helped in his escape will be paying a price. Teena rejects Rome, and he runs again, only to be shot down by Candella. The moral order is ultimately restored, but no one has been left unscarred.

Hope Emerson
as Rose Given

Jane Nigh
as Nurse

Thomas Nello
as Julio
View All

Critic Reviews for Cry of the City

The beauty of Siodmak's film is how it objectively observes how a man acts with the spectre of death on his shoulder.

In luscious blacks and whites, this film noir thriller takes place in Little Italy, New York, and is a precursor to the cinema of Scorsese, with a touch of Hitchcock in its affectionate embrace of man's dark side.

The sequences on the rainy, neon-lit streets of downtown Manhattan are brought off with exhilarating flair and the two men's closeup confrontations have power and punch.

It's an exciting motion picture, credibly put together to wring out every bit of strong action and tension inherent in such a plot.

Riveting example of Siodmak's skill not only in transforming indifferent material, but in giving the feel of studio noir to location shooting.

...a deliberately-paced drama that grows more and more compelling as it unfolds...

Bold, uncompromising and brimming with powerful performances, Cry of the City is something of a forgotten classic

The urban atmosphere of city traffic and the scuffed and worn authenticity of real storefronts and sidewalks gives the film a charge of realism but Siodmak forgoes docurealism for his beloved expressionist style.

the strengths of Cry of the City lie mostly in the strong performances ... and realistic evocation of life among the urban poor

Splendid on-location photography by Sersen and top performances from Mature, Conte, and the wicked Emerson make this a film noir must.

Audience Reviews for Cry of the City

There are no featured audience reviews yet. Click the link below to see what others say about Cry of the City!

Cry of the City Quotes