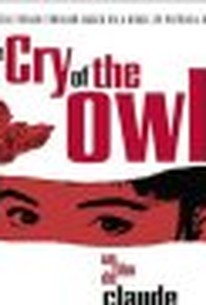 The Cry Of The Owl (Le Cri du hibou) Photos

Based on a novel by Patricia Highsmith, Le Cri du Hibou concerns Robert (Christophe Malavoy), a commercial artist who has moved to a quiet neighborhood in Vichy, hoping to escape a severe depression brought on by the unpleasant breakup of his marriage to Veronique (Virginie Thevenet). Robert finds himself spying on his new neighbor Juliette (Mathilda May), but there's little or no erotic component to his voyeurism -- she seems to lead a simple and well-ordered life, and it makes Robert feel better to watch someone so secure and at ease. Robert even goes so far as to tell Juliette how much her admires her quietly contented existence, but beneath the surface, Juliette is hardly as secure as she looks. Robert's remarks make her wonder if her life has become too placid, and she decides to break off her engagement with Patrick (Jacques Penot) to pursue a relationship with Robert. This sends Patrick into a rage, and he plots an elaborate revenge -- he picks a dramatic fight with Robert, and then goes into hiding, leading people to believe Robert killed him. The ruse fools Juliette, who is distraught at the thought that her new love might be a murderer (even though Robert has expressed no romantic interest in her). Le Cri du Hibou was adapted and directed by France's leading suspense director, Claude Chabrol.

Mathilda May
as Juliette

...a terrible, consistently unwatchable piece of work that's about as wrongheaded as they come...

There are no featured reviews for The Cry Of The Owl (Le Cri du hibou) at this time.

The Cry Of The Owl (Le Cri du hibou) Quotes