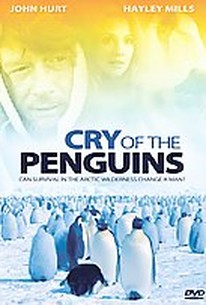 A great deal of director Al Viola's version of this film was pruned away for its general release. The missing portions are not only the heart of the story, but they are the heart of the novel by Graham Billings which gave rise to the film. The whole story is that Forbush (John Hurt) is going nowhere in his romance of Tara (Hayley Mills) because he is basically an uninteresting, shallow man. In desperation, he decides to go off to Antarctica and study penguins. He hopes that his heroism in doing this will prove his sincerity to Tara. Once there, he grows genuinely enchanted by his project and develops a real interest in penguins. It is this, rather than his courage, which wins him Tara's affections. The truncated version omits most of the film's reputedly spectacular and affecting Antarctic footage (shot by Arne Sucksdorff) in order to concentrate on the love story. ~ Clarke Fountain, Rovi

Joss Ackland
as Head of Board

Amanda Steer
as Wendy
View All

Critic Reviews for Cry of the Penguins

It's worth seeing for the penguins, as the humans prove to be less interesting.

This just wouldn't have worked with fakery or process shots

There are no featured reviews for Cry of the Penguins at this time.

Cry of the Penguins Quotes