CSA: The Confederate States of America2005

CSA: The Confederate States of America (2005) 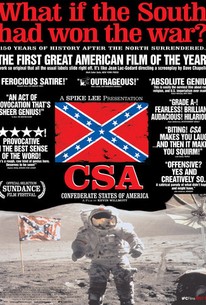 Critics Consensus: Through the eyes of a British "documentary", this film takes a satirically humorous, and sometimes frightening, look at the history of an America where the South won the Civil War.

Critics Consensus: Through the eyes of a British "documentary", this film takes a satirically humorous, and sometimes frightening, look at the history of an America where the South won the Civil War.

Critic Consensus: Through the eyes of a British "documentary", this film takes a satirically humorous, and sometimes frightening, look at the history of an America where the South won the Civil War.

What if the South had won the Civil War? 'CSA' ventures a glimpse at such a world. It simulates the experience of watching the grand history of the Confederate nation as it fights to preserve its antebellum way of life. After triumphing at Gettysburg, the South sends Lincoln packing to Canada and gets cozy in the White House. The long-term result is slavery of all non-Aryans, an all-out conquest and apartheid in Latin America, an alliance with Hitler, a Cold War with Canada, and a slave shopping network.

Will Averill
as Blackface Harriet Tubman

Troy Moore
as Car Guy No. 2

Harvey A. Williams
as Horace

Charles Frank
as Narrator
View All

Critic Reviews for CSA: The Confederate States of America

"C.S.A." tells a counter-story of how slavery survives to the present day-and it uses traces of contemporary pop culture to show that the notion isn't really even such a stretch.

By slyly nudging both history and the language of television, this mock documentary about an America won by the Confederacy ... manages to be both shocking and strangely banal in equal measure.

The satire comes to feel strained and the whole premise gets awfully precious, reducing social subtleties to cinematic simplicities.

There are droll comic flourishes in this very brave film, to be sure, but all you really want to do after watching CSA is hang down your head and cry.

A sometimes incisive, sometimes amateurish look at race in America, the things we do and tolerate as a nation that are really no different from an America ruled by unrepentant slave-holders.

A piece of well-crafted righteous indignation.

[CSA is] an extraordinary new mock-u-mentary.

It's a film beaming with fertile ideas.

a satirist's distorted reflection of today's globe-mastering US, as presided over by a god-fearing Southerner with imperialist tendencies and a penchant for warmongering.

Unrelenting in its cleverness but repetitive in hammering home this message of shameful black oppression.

If you've ever wondered what the course America history might have taken if the south had won the Civil War, you might like to check out this infinitely creative, alternately sobering and humorous look at America's lingering legacy of racism.

Audience Reviews for CSA: The Confederate States of America

CSA is a thought provoking and humorous look at the sheer absurdities of white-centric world views. Like Wolfe's "Colored Museum" turned on its head, this uses parody, irony and extreme situations to jolt the viewer into an uncomfortable confrontation with certain types of thought.

In this "what If" we get to see what would happen if the US was Alabama.

It was SOOOOO boring!!! But, it was an interesting concept and the way the film was put together was really unique in my opinion. I don't know if I believe the story though. That's not what I think would have happened.

[font=Century Gothic]"CSA: The Confederate States of America" is a chilling and meticulously researched faux documentary set in an alternate reality where the Confederate States of America won the Civil War(Here termed by one character as "The War of Northern Aggression"; proof that the victors really do write the histories.) and slavery was never abolished. On a limited budget, the movie emulates Ken Burns' style perfectly, complete with readings, archival footage, talking heads and clips of movies thankfully never made. Included are fake commercials about products which actually used to exist. [/font] [font=Century Gothic][/font] [font=Century Gothic]Slavery is the root of all evil and it is frightening to see a modern world where it is still in use. Not only is it the cause of racism(our world and this alternate world do have striking similarities which I suppose is the point) but it also slows the country's development to a crawl. Throughout, Canada shines as a beacon of hope, drawing the brightest northwards.[/font] [font=Century Gothic][/font] [font=Century Gothic]However, I do wish that the filmmakers had included more historic personalities in the mix instead of relying on the fictional Fauntroy family.(Political dynasties rarely last beyond two or three generations. Stupidity tends to creep in eventually.)[/font]