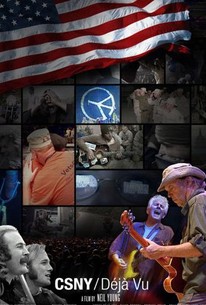 Critics Consensus: Half concert doc, half political exposition, CSNY: DeJa Vu straddles the old and new slant on politics in music with diligence and not a little self-promotion.

Critics Consensus: Half concert doc, half political exposition, CSNY: DeJa Vu straddles the old and new slant on politics in music with diligence and not a little self-promotion.

Critic Consensus: Half concert doc, half political exposition, CSNY: DeJa Vu straddles the old and new slant on politics in music with diligence and not a little self-promotion.

Since their debut in the late '60s, Crosby, Stills, Nash and Young have functioned as the "town criers" of their generation. With songs like "Ohio" and "Find the Cost of Freedom," CSNY were in the forefront of Vietnam-era protest and anti-war sentiment. Though fondly remembered for their harmonies and love songs, the band has never lost its political edge. "CSNY: Déjà Vu" finds the band heading out on their "Freedom of Speech 2006" of North America, featuring music from Neil Young's controversial "Living With War" CD. With "Embedded" reporter, Mike Cerre, aboard, the film documents audience reactions to the music and the band's ongoing connection with its fans, all against the backdrop of the Iraq/Afghanistan War. The film also examines events surrounding the tour in the crucial election season of 2006. Songs from the tour are woven together with archival material, news footage, and audience reaction and observations, as the film examines the issues surrounding the integration of politics and art.

It is a good, strong documentary.

Many come to the shows unprepared for the heavy sermonizing. Others call for it. The documentary seems equally divisive.

CSNY Déjà Vu has some delicious moments, but you never quite shake the feeling that it's documenting a tempest in a teapot.

The band's harmonies have crumbled and their new songs sound like paint being chipped off an aluminum shed with a garden rake. Their hits would sound better on the next eight-track you see at a yard sale.

Young, who directed the movie, compares today's climate with the Vietnam era, and doesn't bother hiding his disappointment in the present.

Recent and archival interview, news, war and music footage, which often juxtapose the Vietnam and Iraq conflicts, round out this unflinching, well-constructed picture.

The combination of music with the performers' dedication makes this more moving than a concert souvenir, though they are almost upstaged by touching moments with veterans.

This is not a rock tour film for CSNY fans so much as a rambling, occasionally thought-provoking, sometimes moving enquiry into the question of whether the sixties protest music generation has lost its leverage over hearts and minds.

What saves CSNY/Deja Vu from its self-importance is the surprisingly lively, timely and timeless music.

Neil Young, though he be the writer of some of the finest, most trenchant, angriest political songs of the last fifty years, has no skill at marshaling arguments in a cinematic context.

The problem isn't what it's communicating. It's the awkward structure and tendency toward redundancy. The film's a hodgepodge of songs, old footage and stories of the Iraq War that just doesn't come together with any sense of narrative cohesiveness.

There are no featured audience reviews yet. Click the link below to see what others say about CSNY Déjà Vu!