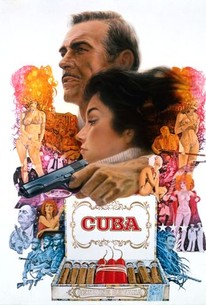 In director Richard Lester's Cuba, Sean Connery plays British soldier-of-fortune Robert Dapes, sent to Havana during the last days of the Batista regime. He is supposed to train Batista's soldiers for their upcoming confrontations with Castro's followers. As Dapes becomes increasingly sympathetic towards the rebel cause, he takes a few precious moments to renew his romance with Alexandra Pulido (Brooke Adams), who is now married to Juan Pulido (Chris Sarandon). The basic thrust of the film is that unchecked capitalism is perfectly capable of collapsing under its own weight -- and that lofty idealism can be easily forgotten once absolute power is within one's grasp.

James Turner
as Chauffeur
View All

Richard Lester achieves a movie similar to a tourism advertisement for people who have basic ideas about revolutions. [Full Review in Spanish]

A deeply flawed movie whose... willingness to complicate the genre it appears to inhabit make it much more valuable than its original reception was willing to admit.

A crushing bore. Even Connery can't save this one.

Incoherent look at life for the upper-crusts during the turbulent last days of the corrupt Batista regime.

'A vivid and dazzling depiction of the Cuban landscape and culture but also a weak plot that barely supports the intricate, detailed visuals.'

There are no featured audience reviews yet. Click the link below to see what others say about Cuba!