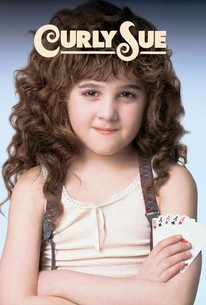 John Hughes dishes out the sentiment by the ladle-full in Curly Sue. The film stars James Belushi as Bill Dancer, a down-on-his-luck drifter who lives by his wits on the highways and byways of the United States, stealing free meals, slipping into movie theaters, and sleeping in welfare hotels. Bill is also the guardian of cute pint-size moppet Curly Sue (Alisan Porter), a cutey pie cross between Little Orphan Annie and Tatum O'Neal's Addie Loggins character from Paper Moon. Bill and Curly Sue are a perfect con team, and they practice their scams when they need money for food. Pulling a knockdown car-accident scam, Bill makes hard-bitten Chicago lawyer Grey Ellison (Kelly Lynch) think that she slammed into him with her car. She buys dinner for the two mountebanks before being taken away by her snotty boyfriend Walter McCormick (John Getz). But the next morning, Grey actually does hit Bill with her car, and she takes the two back home with her. At first, Grey can't seem to get Curly Sue out of her mind, but then she finds herself falling in love with Bill. They begin to form a perfect family until Walter puts in a call to the Department of Children and Family Services. ~ Paul Brenner, Rovi

James W. Bolinski
as The Pawnbroker

Rocco Pecirno
as Father of the Bride

Curly Sue is a cornball, soupy, syrupy, sentimental exercise in audience manipulation, but that's the good news, because this is a movie that works.

Everyone who has to do with it -- particularly John Hughes, the writer, director and producer of it -- should be ashamed.

The film has a desperately cutesy-pie charm that drips with flop sweat.

Reprehensible from start to finish, and utterly manipulative and mindless to boot.

Any similarity between Curly Sue and Shirley Temple is practically intentional.

It's the first film in which Hughes flat-out sentimentalizes being rich--moreover, selling out.

Is this the same John Huges who wrote "The Breakfast Club"? I don't think so.

Cutesy homeless pair (a man and a little girl!!!) bum around from town to town (!) until they literally run in to a sympathetic lawyer (!!!), and that's just the set-up (unbelievable!). Dated because Hughes intentionally means to conjure up the days and spirit of Shirley Temple's joie d'vivre this only achieves a violation of audience goodwill. 3 year olds will disagree w/my assessment, I grant you that.

John Hughes got into making movies with kids in the 90s instead of teens, Home Alone was good, but this one was more mediocre, I think. I saw it a long time ago, I'd like to see it again and rewrite this.

Excellent film and I really enjoyed it. I agree with all the other people that this is a really great film. I doubt my rating will help matters but we'll see. It's a shame we haven't seen Porter in anything since this film. My only qualm is if they might have cut down slightly on the comedy, but it was still a great film. I wondered why this hadn't got a higher rating. Just shows, doesn't it?