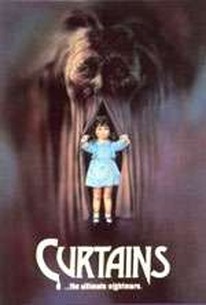 This derivative Canadian thriller plays like a distaff version of Samuel Fuller's cult classic Shock Corridor fused rather crudely to a standard mad-slasher plot. The story takes place primarily at the country villa of a sleazy horror film director (scenery-chomping John Vernon), where auditions for the title role of his new film Audra are taking place. The casting session is called after the film's intended star had herself committed to an asylum in order to properly research her Frances Farmer-type role, then found herself unable to get out. It comes as little surprise, then, that the six actresses vying for the plum role in her absence are not long for this world, as a witch-masked marauder is wandering the premises with some well-honed implements. This film's surprisingly stylish look is probably due to the initial direction of acclaimed cinematographer Richard Ciupka, but the film was actually completed by a pseudonymous replacement. (The credited director, "Jonathan Stryker," is actually the name of Vernon's character.) ~ Cavett Binion, Rovi

Bunty Webb
as Tickler
View All

Has some amazing moments even it doesn't add up to much, and there is a reason that scenes like a murder on ice have become more iconic than the film itself.

This film has much to say about the plight of actresses, continually blurring the lines between reality and fiction, as well as character and identity.

One of the tiny handful of genuinely unique one-offs in the slasher genre's history.

It's a mess, but an entertaining one thanks to Ciupka's visual ambition and ensemble work from the oddball cast, who deliver the proper level of hysteria to assist what little suspense remains.

On the positive side, there's Vernon and Eggar even being in the film. I enjoy these veteran actors and wish they had more to do. You can also argue the killer's mask is pretty scary. And, at least, the ice skating murder is original.

The closer one peers into the weird and macabre pleasures of "Curtains," the more its technical mastery and subtextual implications reveal themselves.

A thriller and a slasher horror movie. I enjoyed it. There are some really creepy scenes, and strange things that happen to confuse you about the killer. It's not a really great movie, but it's good for a lesser known slasher flick.

Wildly uneven 80's slasher with huge gaps in both logic and plot. The mask and the toilet scene however are to be commended.

Decent film with a somewhat cool killer, atmosphere, music, and the storyline that make it worth watching. .

A superb 80's Canadian horror movie! It begins with a famous but insane movie director Jonathan Stryker (John Vernon) locking his lovely actress wife in a mental hospital with the understanding she's studying for the role of a mad-woman; but he doesn't let her be released! Years later, John Stryker holds a very special audition event at his secluded country estate, by invitation only, to six beautiful actresses, for the role which his now-insane wife was to play. Each of the girls are killed one by one by a frightening killer wearing the mask of an old woman. My favorite scene was on the outdoor ice rink, with one of the girls skating to Burton Cummings' song and savagely slashed by the freaky killer. I liked all the imagery with the dolls they used. Underrated horror film. I hope it comes to region 1 DVD soon.