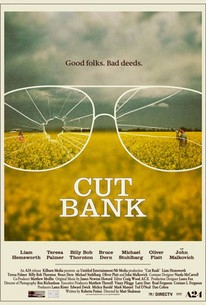 Dwayne McLaren (Liam Hemsworth) dreams about escaping small town life in Cut Bank, Montana, "the coldest spot in the nation," with his vivacious girlfriend Cassandra (Teresa Palmer). When Dwayne witnesses an awful crime, he tries to leverage a bad situation into a scheme to get rich quickly but he finds that fate and an unruly accomplice are working against him. Thrust into the middle of a police investigation spearheaded by the local sheriff (John Malkovich), everything goes from bad to worse in this all-American thriller. Directed by Matt Shakman and also starring Billy Bob Thornton, Bruce Dern, Michael Stuhlbarg, and Oliver Platt. (C) Official Site

Quite apart from the equally apparent lack of the Coens's extraordinary visual acuity, Cut Bank comes up short because it simply presumes that guilt and evil already live in town, just waiting for us to arrive and see the show.

Deficient in charisma, Hemsworth lacks both the grit and grin that his complicated role demands.

Like many of its brethren, the movie seems to love itself while hating its characters.

While there's some undeniably inherent joy in just seeing some of these great actors play off each other, the sum here is a shockingly dull affair, almost made more disappointing by the talent it wastes.

Shakman is clearly going for a dark and bloody Fargo-style crime thriller, but the biggest crime in the film is just how derivative it all feels.

Patino's flights of high-flown language are both tasty and distracting; Dern, in ultra-crusty mode, makes the most of a crucial tirade. If only anything felt at stake in this story's dark spiral.

It reveals Shakman as someone with enough hand to deliver wholesome entertainment. [Full Review in Spanish]

While lacking the complexity of the greater works it clearly admires, Cut Bank is a serviceable adventure with some genuine surprises.

Were Cut Bank not a movie but a pilot, with room and inclination to grow, maybe it could seem like more than just a hasty mash-up.

Cut Bank is a pretty terrible film that I've developed a misplaced affection for anyway.

Cut Bank is ersatz in almost every way, a parade of dumb people doing foolish things while other, dumber people plod along behind them slowly putting things together.

There are no featured audience reviews yet. Click the link below to see what others say about Cut Bank!