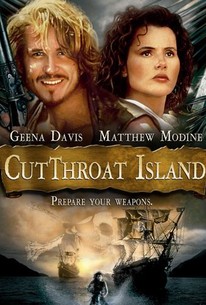 Critics Consensus: Cutthroat Island may aspire towards the earnest thrills of classic swashbucklers, but a distinct lack of charm and stilted script make this adventure a joyless hodgepodge of the pirate genre's flotsam and jetsam.

Critics Consensus: Cutthroat Island may aspire towards the earnest thrills of classic swashbucklers, but a distinct lack of charm and stilted script make this adventure a joyless hodgepodge of the pirate genre's flotsam and jetsam.

Critic Consensus: Cutthroat Island may aspire towards the earnest thrills of classic swashbucklers, but a distinct lack of charm and stilted script make this adventure a joyless hodgepodge of the pirate genre's flotsam and jetsam.

Geena Davis stars in this adventure saga as the most swashbuckling female pirate to ever lay waste to the seven seas. Morgan Adams (Davis) is the daughter of a pirate who has followed in her father's footsteps. When he dies, he passes along his ship, a crew of bandits, and one third of a treasure map (which happens to be tattooed on his skull). Morgan is eager to search out the rest of the map and retrieve the riches, but the fragment she holds is in Latin. Morgan then buys a well-educated slave, William Shaw (Matthew Modine), who can read the ancient language and already has a taste for the criminal life. However, Morgan and William are not long into their search when they discover that someone else is following the same trail for the rest of the treasure map: Dawg Brown (Frank Langella), Morgan's uncle and as black-hearted a scurvy dog as ever boarded a ship. As Morgan and Dawg battle each other over the fragments of the map, a British journalist (Maury Chaykin) covers their feud for the penny press. William Shaw was originally to have been played by Michael Douglas, who dropped out in the early stages of this troubled production.

Richard Leaf
as Snake the Lookout

What seemed like a dubious proposition on paper plays even more dubiously onscreen, as "Cutthroat Island" strenuously but vainly attempts to revive the thrills of old-fashioned pirate pictures.

In this $90m revisionist swashbuckler, we get Geena Davis doing the all-action honours, and a hotchpotch script that seems to think pirate movies are so funny in themselves the need for more humour is superfluous.

t's not possible to believe that Ms. Davis is the highly respected captain of a pirate ship, and it's not even fun to try.

If the sight of half-naked, tattooed sailors firing cannons at each other shivers your timbers, climb aboard. Even passable pirate movies don't sail by every day.

It is a pirate picture, pure and simple, and doesn't transcend its genre except perhaps in the luxurious production. Leaner and meaner pirate movies have worked more or less as well, but this one gets the job done.

It takes a two-hour act of will to keep facing the screen during this moribund movie.

A chaotic jumble of bad action, juvenile comedy and chilly romance, all wrapped in a cheesecloth of limp, lifeless pirate cliches.

It's hardly the landlubber suggested by its reputation (which has more likely shifted more toward novel curiosity than cautionary tale). But if all the parties involved suspected they were going broke, they should have gone *for* broke to boot.

Hey, are you looking for an exciting movie about pirates of the, well, um, Caribbean? [Blu-ray]

Island is a one-of-a-kind, full-steam-ahead practical pirate event, and while it's bolted together with minimal attention to thespian proficiency, it sustains a special rhythm of eye candy and fortitude that makes it an enduring curiosity.

It has got to be one of the cheesiest Pirate movies to ever be put on screen, but by the end of the film you can appreciate it for what it was. The film feels like it is very self-aware of itself, which I love, and the action does not disappoint, even though it is very very over-the-top. The acting is not that great and the bad one liners make me cringe, but it is pretty funny to watch at times. The story is not original in any way, but it is kind of forgivable. I enjoyed some of this movie, but some scenes just bored me to death. "Cutthroat Island" is a guilty pleasure one time around, but that is about it.

Renny Harlin updates the Flynn classic swashbucklers by a) casting a female, Geena Davis, as the lead, and b) injecting more "boom!" into the mix with a lot of pyrotechnics. It almost works. Its a brash, brawling pirate film alright and sorta fun alright but it somehow fails to connect. Matt Modine plays the Flynn part okay, Flynn in the supporting position instead of as the lead, which is disconcerting, but maybe what's missing more in the film is the objective: the Flynn pirates took the gold too, but were actually "fighting for England!" or "freedom!" or some such and not simply the booty ...

Entertaining, but not the best film of Genna Davis.